Today in Dimondale Michigan Donald Trump gave what was not only the best speech of his campaign but a speech that will one day be seen as a landmark in the emergence of a new Republican Party – a party finally returning to its roots as the party of Lincoln. If this sounds like hyperbole ask yourself what other Republican leader in recent memory has addressed America’s African American communities in this voice:

The African-American community has given so much to this country.  They’ve fought and died in every war since the Revolution.  They’ve lifted up the conscience of our nation in the long march for Civil Rights.  They’ve sacrificed so much for the national good.  Yet, nearly 4 in 10 African-American children still live in poverty, and 58% of young African-Americans are not working. We must do better as a country.  I refuse to believe that the future must be like the past.

Trump’s Dimondale speech was a pledge to African Americans trapped in the blighted zones and killing fields of inner cities exclusively ruled by Democrats for half a century and more, and exploited by their political leaders for votes, and also used as fodder for slanders directed at their Republican opponents. This was his appeal:

Tonight, I am asking for the vote of every African-American citizen in this country who wants a better future. The inner cities of our country have been run by the Democratic Party for 50 years.  Their policies have produced only poverty, joblessness, failing schools, and broken homes. It is time to hold Democratic Politicians accountable for what they have done to these communities.  It is time to hold failed leaders accountable for their results, not just their empty words. 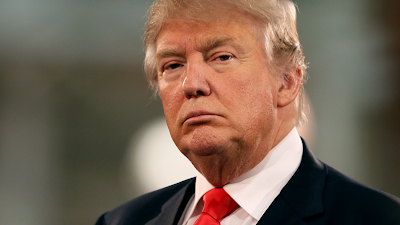 Time to hold the Democrats responsible for what they have done. For twenty years I and many others on the right have waited for Republican leaders to do just this. Until now we have despaired of seeing this happen in our lifetimes. But here is Trump articulating the very message we have been waiting for - support for America’s inner city poor – a message that should have been front and center of every Republican campaign for the last fifty years.

Trump: “Look at what the Democratic Party has done to the city of Detroit. Forty percent of Detroit’s residents live in poverty.  Half of all Detroit residents do not work. Detroit tops the list of Most Dangerous Cities in terms of violent crime. This is the legacy of the Democrat politicians who have run this city.  This is the result of the policy agenda embraced by Hillary Clinton…. The one thing every item in Hillary Clinton’s agenda has in common is that it takes jobs and opportunities from African-American workers.  Her support for open borders.  Her fierce opposition to school choice.  Her plan to massively raise taxes on small businesses.  Her opposition to American energy.  And her record of giving our jobs away to other countries.”

Tying the fight to liberate African Americans and other minorities from the violent urban wastelands in which Democrats have trapped them to his other proposals– secure borders, law and order to make urban environments safe, jobs for American workers, putting Americans first – these are a sure sign that Trump has an integrated vision of the future towards which he is working. Call it populism if you will. To me it seems like a clear-eyed conservative plan to restore American values and even to unify America’s deeply fractured electorate.

I love this line: “America must reject the bigotry of Hillary Clinton who sees communities of color only as votes, not as human beings worthy of a better future.” Yes African Americans and other Americans too are suffocating under the racism of the Democratic Party which takes African Americans for granted and lets the communities of the most vulnerable sink ever deeper into a maelstrom of poverty and violence without end.

Trump being Trump offers this constituency that has turned its back on Republicans for half a century this deal maker: “Look at how much African-American communities have suffered under Democratic Control. To those hurting, I say: what do you have to lose by trying something new?’

In the boldest imaginable way, Donald Trump is doing what Republicans have been talking about doing for a generation but have failed miserably to achieve – creating a “big tent” and opening up the party to new constituencies, in particular to minority constituencies. The fact that at the moment he is nonetheless distrusted by minorities is partly the result of his flamboyant carelessness with language during his extemporaneous riffs, but mainly because of the vicious distortions of his words and character by his unscruplous Democratic enemies and their media whores. These progressives pretend to care about African Americans but are content to let generations of inner city minorities and their children live blighted lives so long as they can be bussed to the polls every November and cast the votes that keep them in power.

Not to forget the #NeverTrumpers on the Republican side. These defectors are among the loudest slanderers, smearing Trump as a racist and a bigot when he is obviously the very opposite of that. In fact, when you look at what Trump is actually saying and actually doing, Never Trumpism appears as the newest racism of low expectations. To turn their backs on Trump conservatives must write off the inner cities and their suffering populations, regarding them as irredeemable, and unpersuadable, while leaveing them to their fate. Fortunately there is a large constituency in the Republican Party that resonates to Trump’s message of a new Republican Party and a new hope for all Americans - white and non-white – who have been left behind.

You know, a good honest president should end up being solid for Americans. If African-Americans aren't Americans, then let them leave. If they are, prosperity, with honest effort, should be available. However, if Trump just intends more hand-outs and preferential treatment, he will give African-Americans the same thing Obama gave them, in the end. Disaster. And well deserved if they choose it. If you have an IQ averaging 70~80, don't expect much, even as handouts though. Though you might be able to handle a simple job if you don't think you deserve more just because, or because of a history that is too far back, and in which whites killed many of each other for your freedom. That spilled blood paid for any dues owed.

The key is: the poor live day to day, regardless of race. Blacks evidently "tend" to lean this direction even more, but I know poor whites who simply do the same. If you don't have a future, you live for the day. That is the issue. Get these communities to live for something greater than day to day, or even for themselves, and change will come. It's a uphill battle, and timeless. Nothing new under the Sun , so to speak.

I think the IQ is insufficient to generate that, Anon. I just do. Life in civilization for those with a retarded IQ is, if they choose to fit in, going to be better. But it will always be unequal. I guess they have to choose humility or the chaos of a perceived freedom. Segregation may have to be brought back, assuming sanity is possible even yet. But blacks in pre-civil rights era were finally, actually, sort of, making it. Segregated, held to where they weren't as much of a danger and could be useful, expected to be honest fathers and workers... not equal but better than now and better than Africans in Africa. Tight, but that is the choice.

Either that or America has fallen too far and the only way forward is to join the droolers in the macabre dance of the feral. We'll see, I guess.