Embattled Hillary Clinton enforcer Huma Abedin gave foreign leaders and activists special access to Clinton when she was secretary of state after they donated to the congenitally corrupt Bill, Hillary and Chelsea Clinton Foundation, according to newly released emails.

It is yet more evidence that in the event Hillary becomes president her administration will be at least as venal and crooked as her husband Bill’s was. Bill sold nights in the Lincoln bedroom at the White House while he was president but Hillary has been selling her presidential favors in advance for years through the tax-exempt Clinton Foundation, which is little more than an anticipatory bribe processing center. With Hillary installed in the Oval Office, the sky’s the limit.

The trove of newly released emails obtained by watchdog group Judicial Watch through the courts appear to show that Abedin served as a gatekeeper auctioning access to the would-be president in exchange for donations to the Clinton Foundation. When individuals wanted to meet with Hillary, Abedin would say no, and introduce them to the foundation. After the so-called donation was received access to Clinton would be approved. 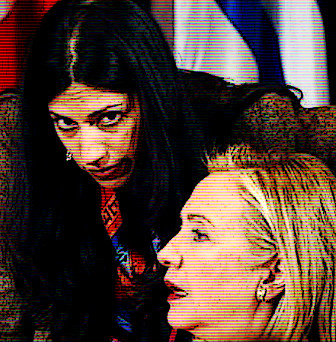 "In more than a dozen email exchanges, Abedin provided expedited, direct access to Clinton for donors who had contributed from $25,000 to $10 million to the Clinton Foundation. In many instances, Clinton Foundation top executive Doug Band, who worked with the Foundation throughout Hillary Clinton’s tenure at State, coordinated closely with Abedin. In Abedin’s June deposition to Judicial Watch, she conceded that part of her job at the State Department was taking care of 'Clinton family affairs.”

“Among the Abedin-Band emails is an exchange revealing that when Crown Prince Salman of Bahrain requested a meeting with Secretary of State Clinton, he was forced to go through the Clinton Foundation for an appointment,” Judicial Watch reveals. “Abedin advised Band that when she went through 'normal channels' at State, Clinton declined to meet. After Band intervened, however, the meeting was set up within forty-eight hours."

The Clinton Foundation’s website indicates that in 2005 Salman committed to creating something called the Crown Prince's International Scholarship Program (CPISP) for the Clinton Global Initiative (CGI), a project of the foundation.

There is also an email thread from 2009 in which Band asked Abedin to get the State Department to expedite visas for members of the Wolverhampton (UK) Football Club. One of the members it seems had a “criminal charge” that had thrown a wrench into the visa issuance process.

Band was inquiring on behalf of Hollywood mogul Casey Wasserman, president of the Wasserman Foundation. Wasserman’s philanthropy kicked in between $5 million and $10 million to the Clinton Foundation.

Abedin arranged nearly immediate access to her boss after Slimfast tycoon S. Daniel Abraham coughed up between $5 million and $10 million to the Clinton Foundation.

Other Clinton Foundation donors got meetings with Mrs. Clinton after Abedin shook them down for gifts to the foundation.

St. Louis political operative Joyce Aboussie asked to set up a meeting between Peabody Energy executive Cartan Sumnar and Clinton. Abedin replied, “We are working on it and I hope we can make something work… we have to work through the beauracracy [sic] here.” Aboussie gave the foundation between $100,000 and $250,000.

Mobile communications executive and political activist Jill Iscol asked Clinton to sit down with Jacqueline Novogratz. The Clinton Foundation took in between $500,000 and $1 million from Iscol and her husband. Secretary Clinton then named Novogratz to the State Department’s Foreign Affairs Policy Board.

A memo sent to Clinton’s chief of staff at State, Cheryl Mills, by State Department White House liaison Laura Pena indicated that Rajiv Fernando had been suggested for appointment to the sensitive International Security Advisory Board in mid-2009. The appointment, which came through in 2011, was controversial because Fernando “had no obvious experience in the field,” ABC News reported. Fernando gave the Clinton Foundation $1 million.

“These new emails confirm that Hillary Clinton abused her office by selling favors to Clinton Foundation donors,” said Judicial Watch President Tom Fitton. “There needs to be a serious, independent investigation to determine whether Clinton and others broke the law.”

Meanwhile, Hillary Clinton’s status as a feminist icon may be in jeopardy after it was reported that Abedin, her likely White House chief of staff should she beat Donald Trump, worked for more than a decade at a Saudi-funded Islamofascist periodical that condemned Clinton’s actions as first lady, praised Muslims’ brutal subjugation of women, and blamed the U.S. for the 9/11 terrorist attacks.

The longtime Clinton aide’s disturbing Islamist background has been examined at length previously by FrontPage but only recently has the mainstream media taken any kind of interest in it. Abedin’s dangerous links to international terrorism take on a heightened importance now that odds-makers favor the former secretary of state to win the presidential election on Nov. 8.

Abedin is joined at the hip to Hillary. She is closer to Mrs. Clinton than Valerie Jarrett is to President Obama. She has been called a second daughter to the Clintons. Abedin is now a vice chairman of Clinton’s campaign after working for her in the White House, her U.S. Senate office, the Clinton Foundation, and at the Department of State. And like Clinton she is married to a serial philanderer – former Rep. Anthony Weiner (D-N.Y.) – who humiliates her and treats her like dirt.

What is new here is that Paul Sperry, author of Infiltration: How Muslim Spies and Subversives have Penetrated Washington, has unearthed articles from Abedin’s tenure at the Journal of Muslim Minority Affairs that savage the feminism and women’s rights that Hillary claims to believe in. Andrew C. McCarthy has said that journal seeks "to grow an unassimilated, aggressive population of Islamic supremacists who will gradually but dramatically alter the character of the West."

Abedin’s mother, the editor-in-chief, wrote in the journal in 2002 that America got what it deserved on 9/11.

“The spiral of violence having continued unabated worldwide, and widely seen to be allowed to continue, was building up intense anger and hostility within the pressure cooker that was kept on a vigorous flame while the lid was weighted down with various kinds of injustices and sanctions . . . It was a time bomb that had to explode and explode it did on September 11, changing in its wake the life and times of the very community and the people it aimed to serve.”

The family matriarch edited a 1999 book that justifies the barbaric custom of female genital mutilation under Islamic law, claiming that “man-made laws have in fact enslaved women.”

Sperry writes in the New York Post that Clinton brags on her campaign website about her enthusiastic support for the UN women’s conference in Beijing in 1995, at which she famously declared, “Women’s rights are human rights.” That speech is at the heart of Clinton’s political identity. It was even highlighted in a Morgan Freeman-narrated video shown at last month’s Democratic National Convention minutes before Clinton took the stage to accept her party’s nomination for president.

“A conjugal family established through a marriage contract between a man and a woman, and extended through procreation is the only definition of family a Muslim can accept,” the article stated. It blames women who wear revealing clothes for being raped and claims that “[p]ushing [mothers] out into the open labor market is a clear demonstration of a lack of respect of womanhood and motherhood.”

In a separate January 1996 article, Abedin’s mother — who was the Muslim World League’s delegate to the UN conference — wrote that Clinton and other speakers were advancing a ‘very aggressive and radically feminist’ agenda that was un-Islamic and wrong because it focused on empowering women.

“‘Empowerment’ of women does more harm than benefit the cause of women or their relations with men,” [Huma’s mother] Saleha Mahmood Abedin maintained, while forcefully arguing in favor of Islamic laws that have been roundly criticized for oppressing women.

’By placing women in the ‘care and protection’ of men and by making women responsible for those under her charge,’ she argued, ‘Islamic values generate a sense of compassion in human and family relations.’

’Among all systems of belief, Islam goes the farthest in restoring equality across gender,’ she claimed. ’Acknowledging the very central role women play in procreation, child-raising and homemaking, Islam places the economic responsibility of supporting the family primarily on the male members.’

She seemed to rationalize domestic abuse as a result of ‘the stress and frustrations that men encounter in their daily lives.’ While denouncing such violence, she didn’t think it did much good to punish men for it.

The elder Abedin opposed the effort in Beijing to expand the definition of the family to encompass “gay and lesbian ‘families.’ ”

Huma seems fine with her mother’s views. “My mother was traveling around the world to these international women’s conferences talking about women’s empowerment, and it was normal,” Huma told Vogue.

The journal’s advisory board is filled with academic advocates for Islamofascism and useful idiots.

Ali S. Asani of Harvard University whines that “[f]or too long, Islam has been taught in the western academy through discourses that primarily represent the religion as a religion of empire and power.” John I. Esposito and John O. Voll of Georgetown University co-wrote a Huffington Post article titled, “In the Middle East, Islamists Are Not the Enemies of Democracy.”

Predictably, the Clinton campaign says move on, there’s nothing to see here.

Abedin was just a figurehead at the journal, according to the Clinton campaign, a flat-out lie that doesn’t even make sense. A figurehead is supposed to be at the top of an organization, something Abedin clearly was not.

“My understanding is that her name was simply listed on the masthead in that period,” Clinton mouthpiece Nick Merrill said after Sperry’s article was published. “She did not play a role in editing at the publication.”

Maybe it was a “no show” job like on The Sopranos.

If Hillary Clinton wins, count on Huma Abedin springing out of bed in the morning every day to show up for work to continue the fundamental transformation of the country set in motion by Barack Hussein Obama.

Her Thighness is a taskmaster.
She Who Must Be Obeyed is the Reset.
Ain't America Great?