Yesterday Judicial Watch released emails showing that a Crown Prince of Bahrain was able to secure a meeting with then-Secretary of State Hillary Clinton through the Clinton Foundation — after being rejected by official State Department channels. Today, the International Business Times follows up on that report by revealing that the timing of this meeting lined up with a sudden, and large, increase in arms sales to Bahrain. Furthermore, this increase came in spite of Bahrain being engaged in massive human rights abuses and suppression of peaceful civilian protests. Finally, Hillary Clinton’s lawyers destroyed the emails documenting this meeting without turning them over to the State Department. These were among the emails destroyed as allegedly “personal.” 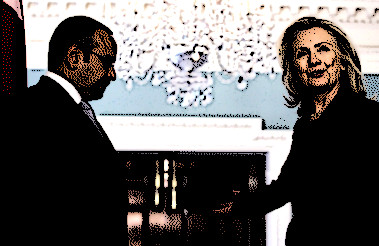 Now, Bahrain is an important regional ally of the United States. The US 5th Fleet, also called NAVCENT as it is the fleet permanently assigned to US Central Command, is based out of Bahrain’s harbors. Bahrain would thus ordinarily enjoy some US military arms sales, as well as occasional access to high level State Department officials. However, in this case the State Department had already turned down the request for a meeting when it came through official channels. So, Crown Prince Salman contacted the Clinton Foundation to ask them to get him a meeting anyway.

Clinton Foundation top executive Doug Band personally contacted Hillary Clinton’s right hand woman, Huma Abedin, to request that she arrange the meeting in spite of official refusal. Band described Crown Prince Salman as a “Good friend of ours,” and he certainly was that. The Judicial Watch release details that Salman arranged more than thirty million dollars in donations to the Clinton Foundation. From the perspective of the State Department, he was just another Arab prince. From the perspective of the Clinton Foundation, he was a good friend who needed special treatment. He got it.

He got more than that, too, according to the Times.

Soon after the correspondence about a meeting, Clinton’s State Department significantly increased arms export authorizations to the country’s autocratic government, even as that nation moved to crush pro-democracy protests…. As Bahrain money flowed into the Clinton Foundation, State Department documents showed that between 2010 and 2012 the Clinton-led State Department approved $630 million worth of direct commercial arms sales to Salman’s military forces in Bahrain. That was a 187 percent increase from the period 2006 to 2008, and the increase came as Bahrain was violently suppressing uprisings.

During those Arab Spring uprisings of 2011 — when Bahrain was accused of using tear gas on its own people — the Clinton-led State Department approved more than $70,000 worth of arms sales classified as “toxicological agents.”

In addition to that, there were sales of armored vehicles, missiles, ammunition, and more. The sale faced intense opposition in Congress, especially given Bahrain’s ongoing massacres of its own citizens in its streets merely for peacefully protesting the government.

But the Crown Prince wanted his meeting, and he wanted his arms, and he got both because he was a good friend of the Clinton Foundation.

Not that the public would have known this, but for the FBI investigation. Clinton’s lawyers deleted these emails without turning them over to the State Department, though it turns out that they are clearly public records that explain just how a momentous decision was made on a major arms deal.

In spite of that, the FBI recommended no prosecution.

Strangely - this is no surprise to anyone having followed this administration and Hillary Clinton - working as a tag team with the 'needed' conduit and active muslim brotherhood agent - Huma Abedin. After all - Huma enjoys playing her role as the 'buffer' between the co-operation of Hillary, Obama and the Islamic enemies of this country. The deals are made even sweeter when millions and billions are made.
If you want to get an idea how high the dollar amount was during Hillary's SOS term and in knowledge of the white house - the figure amounts to 145 'Billion" dollars. That is how Hillary armed the arabs - to the teeth. She authorized or rather sold that amount - in billions - in arms to the middle east dictators although it did not include anyone that did not approve of or supported the House of Saud.
Maybe now it can be said that Huma Abedin is a stealth agents who ensures and follows orders of her benefactors and employer - the House of Saud while she also sees the muslim brotherhood advance in the US and the middle east.
If I could ask Hillary, Huma and Obama - my question would be: Who needed the classified/top secret info made available on the personal servers of Hillary. Who are the 'shadow players' that we given these data and why? I could guess the answer although Hillary et al would flat-out lie. The truth is - we have treason - occurred during Hillary's 4 years as SOS - and nobody cares. Not even the FBI!