THE HILL: 5 Things That Can Obliterate Hillary's Campaign

We’re less than 90 days out from the general election featuring two deeply flawed candidates. In spite of all of Donald Trump's flaws, Hillary Clinton appears to be circling the drain. The Hill’s Niall Stanage offers up 5 things that could trip her up:

There are plenty of things that could trip up her campaign between now and Election Day, even if polls increasingly suggest she is on track to beat Donald Trump in a landslide.

Clinton has a significant advantage in recent polls both nationally and across battleground states. New polls from NBC News/Wall Street Journal/Marist on Friday put her in a dominant position in states that would be close in a normal election year. In Virginia and Colorado, for instance, Clinton led by 13 and 14 points, respectively.

But those polls came after a brutal stretch for Trump, and the race could tighten significantly heading into the fall.

Still, given the electoral map, Trump probably needs some larger development to change the trajectory of the race. Here are five scenarios that could improve Trump’s chances.

Interestingly, there is one huge one missing from the list. Let’s look at this first

Now, looking at these, it is quite possible that Trump pulls the same type of schtick that he used during the primaries and completely gets her off her game, much as he did to other Republicans. What if he gets her mad and throwing out personal attacks? What if he sends her into coughing fits? Gets her red in the face? The optics would not be good for Team Hillary. 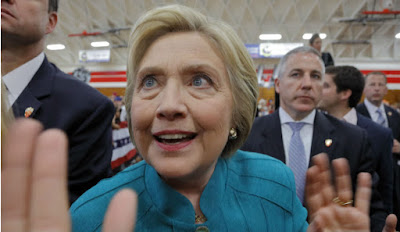 As far as Clinton voters staying home, well, that’s more about Democrat voters staying home. Things like poll support, campaign rally support, social media support, etc, do not necessarily translate into people coming out to vote. There doesn’t seem to be a lot of passion for Hillary as president. We’ll see if this translates into votes staying home.

And they could end up not voting for her. They won’t vote for Trump, that’s for sure. But, might things like her pay-for-play Clinton Foundation schemes cause problems? How about all the money she’s taken from private colleges, which Progressives loathe? Or from countries with horrible human rights records, especially when it comes to gays and women? Might the notion that pretty much all her charitable giving went to her own foundation show her as a charlatan, especially when the Clinton Foundation only spent 10% on actual charity? These are the things that could keep lots of progressives, along with the people who aren’t passionate about politics, home.

A terrorist attack could have an influence, especially if it is a big one by Islamic terrorists, especially since she downplays the threat.

Now, the hacking is mentioned. But this was only in terms of the DNC email hacks. The most dangerous one is whether Wikileaks and Julian Assange, or some other entity, have the emails from her server. Assange has promised a release that could put her in jail. Does he or someone else have that kind of material, or are they blowing smoke? We can brain-storm what it could be all day, but, if there’s something out there, it could keep lots of people at home.

There could be a 7th, that Trump has some special plan to hit her hard after Labor Day in a manner that would reduce her support. Who knows? We’ll see.

The only thing that could possibly take Hillary out is an "episode" on national TV. It could be convulsions, seizures, demonic speaking, uncontrolled and angry torrents of words, loss of muscle control including urine or feces.
All the rest? Meh, me thinks not so much. She could be found eating baby parts like pretzels before the debates and nobody would bat an eye, nor would they if Bill came with a teenage beauty, or told us who gave him AIDS.
Let's hope the bright lights and heat aren't too much for her, nor that long walk to the podium... maybe they should have a sitting roundtable debate where they all sit down like Washington Week in Review.

Keep in mind this article is authored by an avowed #NeverTrumper, William Teach.'So all the negativity he heaps on Trump must be taken with a HUGE grain of salt.

As long as her tourettes doesn't kick in during the debates, she should be alright....

The article lays out each of these one by one. It also mentions that perhaps Trump is holding something back until after Labor Day. Could it be he realizes just how sick and tired of politics most of us are and is holding back to try to give all of us a break?