TRUMP FIRES BACK AT JIHAD: The 'Ideology of Death Must Be Extinguished'

Donald Trump delivered a major foreign policy speech Monday in Youngstown, Ohio, entitled “Understanding The Threat: Radical Islam And The Age Of Terror.”  He lashed out strongly against the Obama-Clinton foreign policies that have led to turmoil in the Middle East, unleashed ISIS and allowed Iran to enhance its power in the region and globally. However, rather than dwell on the mistakes of the past, Trump also outlined his own forceful approach to defeating radical Islamic terrorist organizations once and for all, which includes, but is not limited to, just ISIS alone.

“We cannot let this evil continue,” Trump declared. He decried “the hateful ideology of Radical Islam – its oppression of women, gays, children, and nonbelievers” in a way that President Obama and Hillary Clinton have utterly failed to do. “Anyone who cannot name our enemy, is not fit to lead this country,” Trump said. “Anyone who cannot condemn the hatred, oppression and violence of Radical Islam lacks the moral clarity to serve as our President.”

While Trump’s words were measured, the moral clarity of his vision and strategies to achieve it were crystal clear. “We will defeat Radical Islamic Terrorism, just as we have defeated every threat we have faced in every age before,” he declared.

Trump offered a number of specific proposals to counter radical Islamic terrorism, which he said he would implement as president both abroad and at home. He said that the era of nation-building will be “brought to a swift and decisive end,” if he becomes president. All actions, he added, should be oriented around the goal of halting the spread of radical Islam. 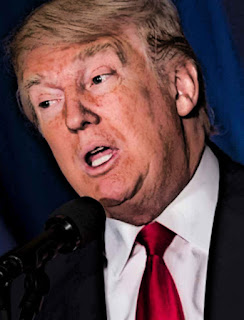 Trump acknowledged the need for international cooperation in achieving this goal, and even called for an international conference with our allies in the fight against radical Islamists. His administration, he said, will “aggressively pursue joint and coalition military operations to crush and destroy ISIS.”

“We will work side-by-side with our friends in the Middle East, including our greatest ally, Israel,” Trump said. “We will partner with King Abdullah of Jordan, and President Sisi of Egypt, and all others who recognize this ideology of death that must be extinguished.”

Obama, by contrast, went out of his way to snub Israeli Prime Minister Benjamin Netanyahu and Egyptian President Sisi, rather than draw closer together in the common fight against ISIS, Hamas and other radical Islamists.

Reversing his previous skepticism regarding the continued usefulness of NATO, Trump praised the mutual defense treaty organization for enhancing its anti-terrorism capabilities and said he would be prepared to have  the U.S. “work very closely with NATO” to defeat Islamic terrorists.

Unlike Obama’s use of a weak “coalition” in name only, in which the United States is doing the lion’s share in fighting ISIS and al Qaeda, Trump said he would be willing to join forces with any country – including Russia – to defeat ISIS and other radical Islamists. “We cannot always choose our friends, but we can never fail to recognize our enemies,” Trump said.

Trump made a point of criticizing Obama and Clinton for telegraphing in advance to the enemy when the U.S. would pull its troops out of Iraq. “I have often said that General MacArthur and General Patton would be in a state of shock if they were alive today to see the way President Obama and Hillary Clinton try to recklessly announce their every move before it happens – like they did in Iraq – so that the enemy can prepare and adapt,” Trump stated.

In addition to the use of overwhelming military force, Trump emphasized the war against radical Islamist terrorism needed to be fought at an ideological level and with use of tools such as cyberwarfare to prevent ISIS from using the Internet to recruit more fighters. “While my opponent accepted millions of dollars in Foundation donations from countries where being gay is an offense punishable by prison or death,” Trump said, “my Administration will speak out against the oppression of women, gays and people of different faith. Our Administration will be a friend to all moderate Muslim reformers in the Middle East, and will amplify their voices.”

The Obama administration, by contrast, worked with the radical Muslim Brotherhood abroad and at home. And it funneled money and arms to Islamists in Syria, Iraq and Libya, some of whom turned out to be radical jihadists who would turn the weapons on us.

Trump will keep Guantanamo Bay open, not empty it out and release radical Islamists who will rejoin jihadi terrorist networks. He would have foreign combatants tried by military commissions, not civil courts. He would continue using drone attacks, but place more emphasis on capturing “high-value targets to gain needed information to dismantle their organizations.”

After reciting the long litany of terror attacks conducted by Islamists in our homeland during the Obama presidency, Trump spent the latter part of his speech discussing new initiatives he would undertake as president to protect the American people from more terrorist attacks.  First and foremost, he wants to institute vastly improved screening procedures for immigrants seeking to enter our country.

“The common thread linking the major Islamic terrorist attacks that have recently occurred on our soil – 9/11, the Ft. Hood shooting, the Boston Bombing, the San Bernardino attack, the Orlando attack – is that they have involved immigrants or the children of immigrants,” Trump noted. “A Trump Administration will establish a clear principle that will govern all decisions pertaining to immigration: we should only admit into this country those who share our values and respect our people. In the Cold War, we had an ideological screening test. The time is overdue to develop a new screening test for the threats we face today.”

Trump would suspend the issuing of visas to individuals from countries which export terrorism and where we do not have an effective process in place to determine with certainty who is seeking to enter the U.S. and why. He would also employ stronger investigatory tools when evaluating prospective immigrants, including search of their social media postings, which might have screened out the female San Bernardino shooter who was able to enter the U.S. on a fiancé visa despite her jihadist postings. “Only those we expect to flourish in this country and to embrace a tolerant American society should be issued visas,” Trump said. His administration would reject not only “all members or sympathizers of terrorist groups” but also those “who believe that Sharia law should supplant American law” and “who do not believe in our Constitution.”

Finally, Trump would reverse the Obama administration’s shameful purging of any references to radical Islam or jihad in law enforcement materials. He promised to” establish a Commission on Radical Islam – which will include reformist voices in the Muslim community who will hopefully work with us.” He said the goal of this commission would be to educate the American people regarding the core beliefs of radical Islam, “to identify the warning signs of radicalization, and to expose the networks in our society that support radicalization.”

President Obama, by contrast, coddled the radical Islamist Muslim Brotherhood. He invited members of Muslim Brotherhood-affiliated groups to the White House. He allowed the Muslim Brotherhood network to extend its influence on shaping his administration’s malignant neglect of the growing threat of jihad in this country.

Saudi Arabian-funded and other radical Islamist groups have mushroomed in the United States and served as breeding grounds for hate and violence against "infidels." The Obama administration has turned a blind eye. Trump vowed that "the support networks for Radical Islam in this country will be stripped out and removed one by one." Guests in this country who preach hate will be asked to leave the country. Political correctness will not be allowed to get in the way of keeping the American people safe.

Donald Trump ended his speech on a positive note, extolling the exceptional values of the United States. “Our system of government, and our American culture, is the best in the world and will produce the best outcomes for all who adopt it,” Trump declared. “We will reject bigotry and oppression in all its forms, and seek a new future built on our common culture and values as one American people.”

How refreshing it would be to hear such words coming from the president of the United States once again. Eight years of moral equivalence is enough.