JW released more than 700 previously undisclosed emails that Hillary Clinton had attempted to hide from public scrutiny. The reasons are obvious: 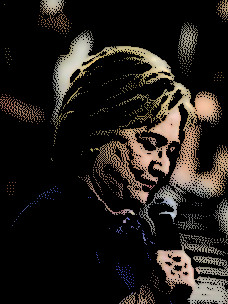 ... in one email exchange, Band emails Abedin, trying to arrange a meeting between Crown Prince Salman of Bahrain and Clinton.

“Cp of Bahrain in tomorrow to Friday, Asking to see [Clinton],” Band wrote to Abedin. He then added, “Good friend of ours,” as if to remind Abedin he was an important Clinton Foundation donor... According to the Clinton Foundation website, the Crown Price established a scholarship fund for the Clinton Global Initiative that had contributed $32 million by 2010.

Abedin replied, telling Band she had failed to set up the meeting through normal State. Dept. channels... Band then apparently jumped into action and intervened, because less that 48-hours later, Abedin was writing Band another email, this time tell him Clinton has ten minutes to meet with the Crown Prince...

...[This is one of] dozens of other examples of what looks like influence peddling on an industrial scale at the Clinton State Department. Sidney Blumenthal even makes an appearance in some of the new Clinton work-related emails, offering his inside advice on the 2009 uprisings in Iran. At one point, he suggests Clinton get the Russians involved by offering to remove a U.S. missile defense system set up in Eastern Europe. All of this is damning evidence that flies in the face of the continued Clinton campaign and State Department denials that Clinton or her aides provided certain donors with special access and treatment.

You've nominated the most corrupt "public servant" since Boss Tweed.

I must be stupid or something, a week ago the dems and mini-true were all up and down tv, newsprint, and the inter-webs telling the world how "risky it would be for Trump to have the required clearances to be prez' yet with all we already know she did with the emails, HOW does she ever get a clearance to walk a dog with her history of bullshit!!! SHE gets the nuke she'd codes just sell those two AND the poor guy carrying them!
DAMN!