Forget the content of the leaks. Just focus on their alleged (not proven, alleged) source. It's them Russians!

Never mind that one of the leaks uncovered the Democratic National Committee’s secret program to deliver its party’s presidential nomination to Clinton at all costs. Did I mention that Donald Trump might be working with them Russians?

Never mind that another disclosure gave the public a glimpse of Clinton’s corrupt “pay to play” scheme, in which high-dollar donors to the Clinton Foundation got special goodies from the Clinton State Department. Who cares? The Ukrainian government (installed in a 2014 coup funded by the US and orchestrated by Clinton’s protege, Assistant Secretary of State for European and Eurasian Affairs Victoria Nuland) just happened to conveniently “discover” “evidence” linking Trump campaign chairman Paul Manafort to THEM RUSSIANS! 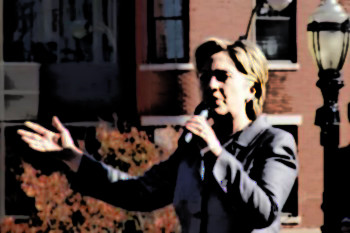 Servergate? Never mind FBI director James Comey’s announcement and testimony revealing that she’s at least recklessly negligent and almost certainly a felon who only avoided prosecution because her name is Hillary Clinton. Loooooooook! Them Russians!

It’s all so maladroit and ham-handed that it would be laughable if not for the stakes:

Clinton’s strategy for distracting attention from her corruption and incompetence, so that she can win the White House, is an all-out attempt to re-start the Cold War (at the risk of one or more very hot wars) and resurrect Joe McCarthy between now and November. And it just might work.

No, I can’t bring myself to support Donald Trump. But it’s getting harder and harder to peg him as the distinctively harebrained, irresponsible, unhinged one in the race. Clinton is still a game down to Trump in the World Series of Crazy, but it looks like the series will go all the way to seven.

It’s been noted over and over, by pretty much everyone, that Donald Trump and Hillary Clinton are the two most roundly despised presidential candidates since polling became a thing. How either one of them got within spitting distance of 1600 Pennsylvania Avenue is a mystery for the ages. And one of them almost certainly moving in come January sounds like an establishing shot for next summer’s top-grossing horror film.

Read more at The Garrison Center.

I'm not sure where you get your news from regarding the chances or support of Donald Trump but you are obviously very wrong. Are you also one of the #NeverTrump?
The population in this country has finally taken a step to get involved in an election that matters and where the GOPe did not get their way and candidate. They have told us time and again to hold our noses and vote for THEIR choice while they despise us - the electorate.
Keep dreaming and doing your part in denouncing the electorate by insulting their hope of someone not beholden to CoC, Goldman Sachs and the rest of the global aristocracy. Listen to the people on the ground rather than continue to spout off while sitting in your ivory tower because we don't care!