A NEW ILLUSTRATED STORY: What it means to be #NeverTrump... 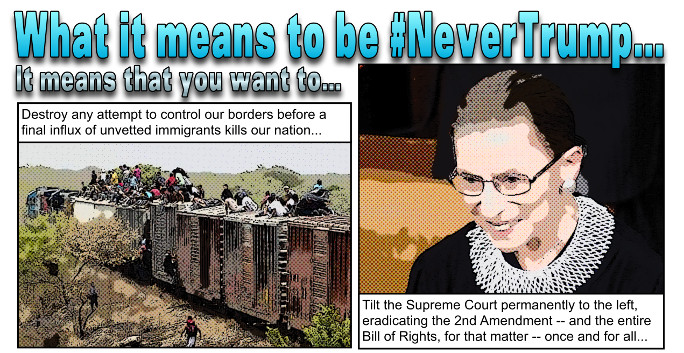 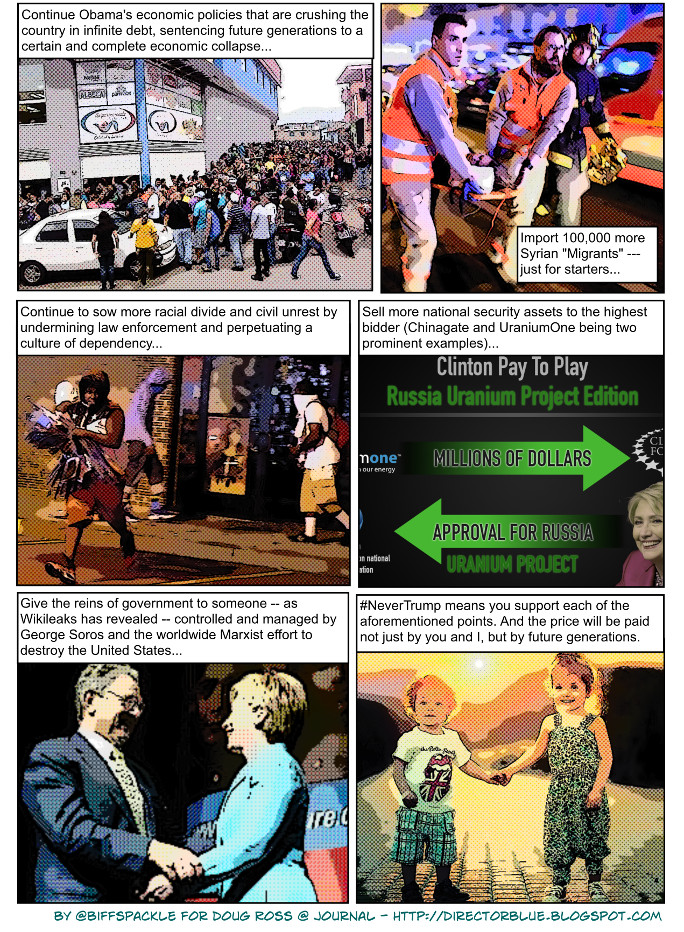 Even if you believe that all the reactionary, inflammatory exaggerations and outright lies about Trump are true, Trump at his worst, would leave us a country that we could rebuild in 4 or 8 years. The truth about Trump is probably somewhere between what the chicken-littles fear and what the Trump worshipers dream of. But even if all the worst fears come true, Trump is survivable. Hillary is not.

After 4 or 8 years of what Hillary would bring, there won't be a country to save. America will be irrevocably changed into the Socialist/Communist capitol of the Globalist Tyranny. Even a 4 year Hillary term is not survivable.

Hillary, the One Party Political System, AND THE NEVER TRUMPER'S are TRAITORS to the only hope of freedom and government for the people and by the people left on Earth.

May God have mercy on your souls Never Trumpers, cause Old Ez has none for you down here.

Wonderful story and great artwork! It's also true, so I heartily approve!

Trump may not be a good pick, but he's what the republican Primary gave us.

Che obama won in 2008 from McCain running a despicably bad campaign. Che-O won re-election in 2012 from too many republicans refusing to go to the polls to vote for Romney.

Now in 2016, Hillary may win, again from too many republicans refusing to go to the polls to vote; or defiantly writing in a name as a form of protest. If they do either, I hope Hillary gives the protest voters everything they deserve.

Maybe you should have worried about all that before nominating the orange idiot.

@DarkHelmet: Consider that his 16 competitors watched the response to his positions on immigration--a response Ann Coulter had predicted--and did nothing. They deserved to lose after being do tin eared to the concerns of the electorate. And I'm sorry if it pains you to hear this but he deserved to win. What do you guys not understand about how this works?

Trump himself said that he didn't need conservatives in order to win. Ironically, everyone who chastises the #NeverTrump camp is essentially calling Trump a liar.

Trump is the only candidate who never had a chance of beating Hillary.
When Trumpkins made Donald the Republican nominee, Hillary's victory was assured.
Trumpkins elected Hillary Clinton.

Steve Kellmeyer is just impervious to any reasoning. He's pleased he found a rhetorical ledge to inhabit.

Trump wasn't "the only republican that would lose to Hillary". Again, all rhetoric, all assertion.

If Hillary wins, it's because Hillary voters voted for her. A Crook. A Liar. A Bribe taker, rape & infidelity enabler, vicious, petty, mean spirited Christian hater.

If you know any who support Hillary, ask how they can do so when she has so often ignored the Rule of Law, with impunity.

Those who vote Hillary are the ones, the evil ones, who will bring on the catastrophe of her election.
Media tools, movie stars, Democrat leaders -- most critiques against what Trump says, Hillary & Obama have already done; tho in the case of a Wall, the Dems do the opposite and let everybody in, legal and illegals alike.

Few (except top Reps) who say "they would have voted for a good Rep, but not Donald"... actually supported Romney, a great man, mediocre nominee. Dems vote lockstep for a Dem, and don't want to hear about her terrible results.

NeverTrumpkins are silly -- Hillary supporters are supporting the end of Rule of Law, the end of "all men are created equal".

Yes for Trump and Reps in Congress, no no no for terrible Hillary and Dems.

But Trump is ICKY!

The object of a preposition is in the objective case. It's "by you and me," not "by you and I."

A commenter writes, "Now in 2016, Hillary may win, again from too many republicans refusing to go to the polls to vote; or defiantly writing in a name as a form of protest. If they do either, I hope Hillary gives the protest voters everything they deserve."

What would the protest voters "deserve," exactly, solely in consequence of having made an error in voting? We don't throw people in jail for disagreeing with us at the ballot box. Nor will they "deserve" any further violation of the rights of all of us that would attend an HRC regime.

Why do the #neverTrumpers not understand this? Why are they so willing to trash everything they believe in so they can virtue signal their hate for Trump? The ironic part is that many of us who support Trump (and he was by no means my first choice) not see that many of us held our noses and voted for McCain and for Romney. We did not decide that Obama was a better choice for conservatives

Yes we must elect the Orange God King, you know that anti-gun, leftist Democrat from New York, to stop same, because that works why?

Biff hits it out of the park! I think Mark Levin must have read it because Larwyn's Links gives us this: "These are really good things he’s saying!”; Mark Levin Praises Trump’s ISIS speech...