RED ALERT: NYT Asks Google to Censor Search Results Related to Hillary's Health Problems and They Do It

Some radical nutjob and New York Times reporter (but I repeat myself) recently called on Google to censor search results related to Hillary's numerous health issues.

Farhad Manjoo is a reporter for the New York Times who writes about tech issues. His latest passion is a beef with free speech, though of course, as a leftist, he would never frame it that way.

More specifically, Manjoo is upset that a Google search about Hillary’s health turns up what he calls “conspiracy theories.” And because he’s decided that the negative information available on line about her health is unfounded, Google should “fix” the problem.

Based on my research, it would appear that Google is now obliging that request:

I did a few experiments, but judge for yourself:

Any results for Hillary health problems? 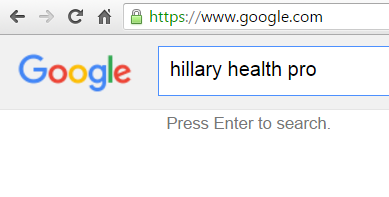 How about Hillary health condition or concerns? 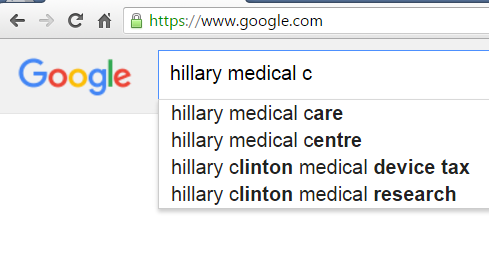 No, apparently zillions of people are searching for "Hillary health centre" instead. That certainly seems plausible.

What does Google Trends have to say about the matter? This separate, and far less used service, allows users to determine search volumes for certain key phrases. I wonder what it has to say about search volume for Hillary health questions?

Gee, that seems awfully curious. As tales of Hillary's falls, concussions, confusion, reported seizures, sleepiness and a possible tongue biopsy slipped out of late, searches for Hillary health have skyrocketed.

Pity the guys at Google Type-Ahead Land never got the memo. 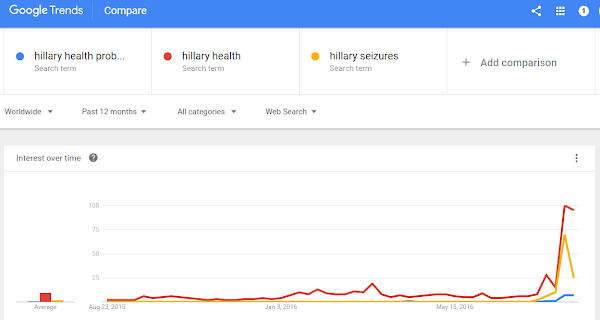 In fact, the number of folks searching for Hillary seizures and Hillary health problems are also noteworthy. 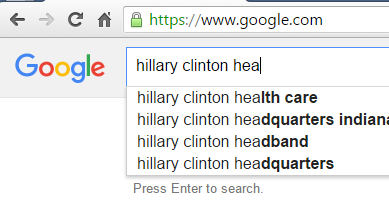 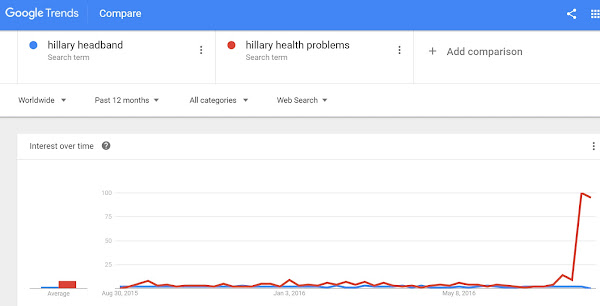 So, shut up: there are no concerns whatsoever with Hillary’s health. Why, just ask our new Overlords at Google, all you rubes in flyover country.

I'm getting similar but not quite as blatant results.

I think it's important to be logged OUT of Google when doing this to best replicate what an average user might see (although that's far from perfect too, and I think everyone's search suggestions might reference their past search history).

God, they all suck. Orwell was right. Doubleplusungood.

@Tom, those results appear in Incognito mode (no login info).

From Yahoo search, if you had any doubt about google

This kind of logic has been tried before and it's just as wrong now as it was then: http://www.washingtontimes.com/news/2016/jun/10/google-denies-burying-bad-hillary-clinton-stories/

(also, of course, claiming on a platform that Google provides to you for free, that it would try to undermine free speech is just utterly paradoxical…)

Hey Anonymous, you provided a link to http://www.washingtontimes.com/news/2016/jun/10/google-denies-burying-bad-hillary-clinton-stories/ but did you even read the whole thing? It basically repeats what this page does: that Google's search terms for Hillary are highly suspicious, while Yahoo and Bing's do not filter out bad searches. Subsequently, Google does not filter the same "negative" terms out when it came to Trump or Bernie.

JohnVermi said...
This comment has been removed by a blog administrator.
2:25 AM

Anonymous said...
This comment has been removed by a blog administrator.
12:59 AM

Anonymous said...
This comment has been removed by a blog administrator.
12:13 AM

Circutrine Male Enhancement said...
This comment has been removed by a blog administrator.
5:12 AM

Unknown said...
This comment has been removed by a blog administrator.
12:19 AM