GEE: I wonder why Hillary won't talk about the economy?

At the end of the day, in virtually every poll, the top issues are the economy, jobs, and wages. This is what Americans truly care about. Bread and butter issues. All the social justice worker stuff is low hanging fruit. Man-induced climate change is typically last or next to last. Most of the things Hillary talks about are low ranking issues.

Why? Because it’s rather hard to make the case to keep doing the same things that have left the economy crippled.

The new GDP numbers are terrible. No wonder Hillary won’t talk about the economy

We got revised GDP numbers from the Commerce Department on Friday and the economy actually did slightly WORSE than originally estimated. Growth was 1.1 percent in the second quarter of this year and less than 1 percent for the first six months of 2016. The business sector of the economy has sunk recession territory. Profits are srinking (down 2.4 percent last quarter) so how long can the stock market rise?

The consumer is keeping the economy out of negative territory, but that’s only because we are spending more than we are earning.

How long can that go on? About as long as the housing bubble could inflate without bursting.

For years the polls have shown that Americans are hyper-concerned about the economy and job security. That was when the economy was growing at a meek 2 percent. Now at 1 percent, we aren’t just treading water, more families are being plunged underwater.

Where’s all the growth under Obama’s economic policies? At the top.

The Democrats who keep saying how well the economy is doing seem to be living in an alternative universe. And that’s probably because so many of the leftwing pundits and economists live and work in Washington DC, which really is doing just fine – thank you. DC is booming thanks to the tribute taxpayers from real America send each month to the capital. Three of the five wealthiest counties are around DC. That tells you everything about who is getting rich off liberal government expansion policies.

For all the caterwauling from Democrats about the rich getting rich during the George W Bush era, they don’t seem to have the same zeal to attack the Democratic Party policies that are truly helping the rich at the expense of the lower and middle classes. Not too mention policies that simply hurt the lower and middle classes while growing the size of the federal government.

Hillary says that what the economy really needs now is a tax increase. Crazy. ‎A new study by the National Center for Policy Analysis says that Hillary’s economic plan will eventually shave 1 percent off GDP. That would technically sink the economy down to zero growth. 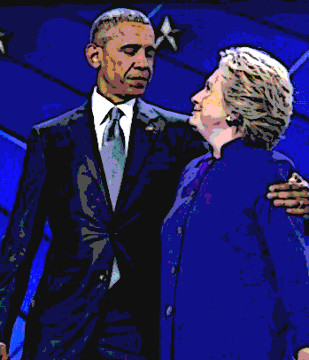 Interestingly, for a woman making so much money off of speeches and such, she refuses to cut a check to the IRS to match the tax increase she wants on “the rich.” For a goodly chunk of “the rich” raising the income tax level will do little, since their money is so often made off of capital gains. Hillary’s would be directly filed as income. Guess she doesn’t want to pay her fair share voluntarily.

Her jobs plan would kill hundreds of thousands of jobs. Her energy plan would likewise kill lots of jobs and increase the cost of living for Americans. The aforementioned tax plan would reduce the GDP by 1%, meaning zero growth. The Obama/Democrat economic policies have created the worst economic recovery of all time. Manufacturing has not come back. Good paying jobs are getting harder and harder to find. Want to flip a burger or pour coffee? Good news. Base level jobs have grown. But, thanks to Obamacare, hours will be tightly controlled.

Trump must hammer Hillary and Obama on these abysmal economic developments. What is needed? ‎Tax cuts. Deregulation. American energy production. Repeal of Obamacare. He should talk about little else if he wants to win.

Sage advice. If Trump wants to win, he needs to spend the bulk of his time talking about the economy, jobs, and wages. All the distractions and personal attacks need to be minimized. And all the gaffes need to be minimized, so that he can get his economic ideas out into public.

You know what else is low hanging fruit? Illegal immigration. The same polls that show things like ‘climate change’ as utterly unimportant when stacked up against real issues also show that dealing with illegal immigration is also not all that important. So, he needs to minimize discussion of illegal immigration, and mostly discuss it in terms of the economy and jobs. Attack Hillary and Democrats on their ideas/policies from an economic point of view. ‘Climate change’? Discuss how this will harm people’s livelyhoods and cost of living. The over the top spending, rising deficit, horrific government debt, out of control regulations. Discuss them, and make them personal to citizens.

Bill Clinton’s advisor had an internal message for his people “The economy, stupid”, which morphed to “it’s the economy, stupid.” Yes. He’s right. People are going to care about what effects them. A second, less know internal saying was “change vs more of the same.” This is what Trump needs to do. The economy and “do people want to continue doing what hasn’t worked?” The primaries are long over. The general election is coming up fast. Hit Hillary and Obama on the subjects that people care about.