Obama’s healthcare “reform” legislation included a federal takeover of the college student-loan business.   Obama touted this aspect of “reform” as a way to save $68 billion over the next 11 years. The savings would go to pay for expanded Pell Grants for low-income students and to help low-income graduates pay back their student loans.  But more is going on here than the standard Obama redistributionist impulse. Student loans have become a weapon to attack and control private colleges.  .. Within days of the federal takeover of the student loan program, this dysfunctional picture got worse.   Obama attacked private for-profit colleges like the University of Phoenix.

The result -- like all of Mr. Obama's initiatives -- is to eradicate consumer choice and put ever more control in the hands of government. And his relentless, destructive efforts have been successful:

Over the last five years Phoenix’s enrollment has dropped by half to 220,000 students due largely to the left’s assault on for-profit education, which has knee-capped recruiting. Since President Obama’s first inauguration, the stock price of Phoenix’s owner Apollo Education Group has plunged by 90%. In 2012 the university shut 115 campuses.

I guess the Clinton crime syndicate family never got the memo.

Or maybe they did, but the nearly $20 million in payola they received from for-profit "Laureate University" overrode any trivial policy differences they might have had with Mr. Obama: 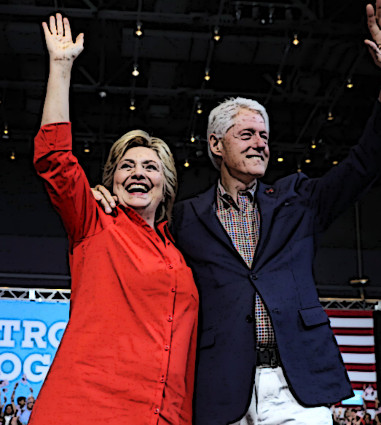 Bill Clinton was paid more than $1 million in 2015 by Laureate Education, a global operator of for-profit colleges, according to tax returns released today by Hillary Clinton’s campaign.

The new figure brings the former president’s total compensation from Laureate to more than $17.5 million for his five-year role as an “honorary chancellor.” His role consisted of advising the company on educational matters and traveling to campuses across the world to speak to young people. Clinton ended his position at Laureate in April 2015 after Hillary Clinton launched her bid for the White House.

Laureate International Universities, the company’s international arm for which Clinton worked, has donated $1 million to $5 million to the Clinton Foundation, with a new contribution made as recently as the second quarter of this year, according to records posted on the foundation’s website.

Laureate is in the process of going public (it filed for an IPO last year), which will likely enrich the Clintons even more.

Mr. Obama could not be reached for comment on this matter at press time.