For months experts and the media insisted that it was inconceivable and impossible for Muslim terrorists to enter Europe or America by pretending to be Syrian refugees. Now it's just a fact of life.

That's the way it usually is with the left. The disastrous outcomes of their policies are denied and then they're just a reality that we're expected to cope with. 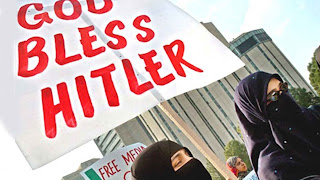 German intelligence services have evidence that “hit squads” from the Islamic State terror group have infiltrated the country disguised as refugees, the deputy head of Bavaria’s spy agency told the BBC Thursday.

“We have to accept that we have hit squads and sleeper cells in Germany,” Manfred Hauser, the vice president of the Bavaria region’s intelligence gathering agency, BayLfV, told the Today program.

“We have substantial reports that among the refugees there are hit squads. There are hundreds of these reports, some from refugees themselves. We are still following up on these, and we haven’t investigated all of them fully,” said Hauser.

Why do we have to accept them? Because we keep accepting Muslim migrants who claim to be refugees. We have to keep eating the whole bowl of candy wondering which of the pieces is poisoned.