Iran wants America to open its wallet a bit wider.

Former Iranian President Mahmoud Ahmadinejad sent a letter to President Obama demanding the release of $2 billion in Iranian funds that were seized from bank accounts in New York earlier this year.

The money was taken to compensate family members of victims of the 1983 bombing of a Marine Corps barracks in Beirut and other attacks blamed on Iran under a Supreme Court ruling in April. In all, 1,300 American victims have a legal claim to the money.

Ahmadinejad — known for his anti-Americanism and anti-Semitism — is said to be considering a political comeback and may be using Obama as a pawn to improve his standing.

“It is the clear expectation of the Iranian nation that the particular case of property seizure . . . be quickly fixed by your excellency and that not only the Iranian nation’s rights be restored and the seized property released and returned, but also the damage caused be fully compensated for,” says the letter from Ahmadinejad, which was made public Monday. 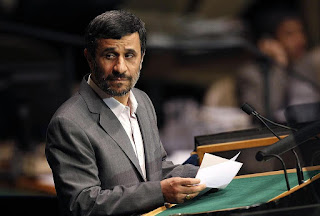 “I passionately advise you not to let the historical defamation and bitter incident be recorded under your name,” he added.

The money — which critics are calling a ransom — was received by the regime on pallets loaded with Swiss francs and euros, and secretly delivered in an unmarked cargo plane.

“Ahmadinejad’s comments . . . add further evidence to a danger of the ransom President Obama paid for the hostages in January — namely, that it reinforced Iran’s view that it can keep making outrageous demands and the Obama administration will try to comply,” said Michael Makovsky, head of the Jewish Institute for National Security Affairs.

“Of course, the White House should ensure any potential Iranian funds in US possession go to victims of Iranian terrorism, and there are billions of claims, and not go to supporting the wicked regime in Tehran,” Makovsky said.

“The Obama administration will do anything to keep Iran from walking away from the nuclear deal,” said Noah Pollak, executive director of the Emergency Committee for Israel.

State Department rep Elizabeth Trudeau told The Post, “We have seen the letter reportedly sent from former President Ahmadinejad to President Obama” and referred comment to the Justice Department, which declined to offer any.

"...be quickly fixed by
YOUR EXCELLENCY" ???
Wow. How can Obama refuse?