CLINTON VS. TRUMP TAX PLANS: The Differences to Your Wallet Will Blow Your Mind

Clinton wants to increase taxes on individuals, specifically wealthy Americans, and businesses. She also proposes a significant change to the capital gains tax and wants to expand the estate tax, according to analysis by the Tax Foundation.

Trump wants to abolish the estate tax and wants an income tax reduction that encompasses most American families.

Let’s get into the specifics of each tax plan and how they impact America’s bottom line.

“Clinton’s plan is carefully tailored to affect pretty much only households making over $250,000 in income. There are a couple tax changes that might incidentally affect people in the middle class or low income brackets, but in general it is a tax increase on households making over $250,000 and nothing else,” Scott Greenberg, analyst with the Center for Federal Tax Policy at the Tax Foundation, told The Daily Caller News Foundation. 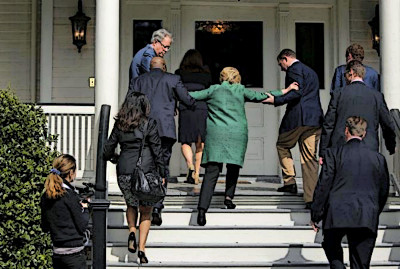 Clinton is proposing to drastically raise taxes on American households that make a combined annual income of $732,000 or more, per year, reports CBS Money Watch. She also supports a 30 percent minimum tax on individuals with adjusted gross incomes over one million, also known as the Buffet Rule, a cap on all itemized deductions at 28 percent, a cap on tax-deferred and tax-free retirement accounts, and a 4 percent surcharge tax on income earners over $5 million, reports the Tax Foundation.

Clinton also supports a tax on soda to cut back on the consumption of sugary drinks, reports CBS Money Watch.

Clinton plans to keep the top capital gains rate on assets held for more than one year at 39.6 percent, but wants to incentive long-term investment by decreasing that rate to 20 percent if the investment is held for six years. The Tax Foundation found that this plan would actually “reduce revenue on both a static and dynamic basis due to increased incentives to delay capital gains realizations.”

Clinton wants to tax large financial institutions, which are interestingly major contributors to her campaign.

She has pledged to give tax relief to businesses with between one and five employees, and simplify the tax process for these small businesses, reports CBS Money Watch.

The Clinton plan has an economic effect in the negative direction. Greenberg tells TheDCNF that “we think it would shrink the long-run economy by about one percent,” adding that this decrease is because “she is discouraging labor, investment and savings among high-income individuals.”

The Tax Foundation’s Taxes and Growth Model predicts her plan would “reduce GDP by 1 percent over the long-term due to slightly higher marginal tax rates on capital and labor.”

“Clinton’s plan is actually pretty short on details about exactly what she would do to business taxation. A lot of it is focused on high-income individuals rather than specifically business activities. But she’s made it clear that she’s interested in targeting businesses that either move off shore or move their operations off shore. So industries that engage in more off shore economic activity or tax activity are likely to be effected most by Clinton’s tax plan,” Greenberg said.

What Does Clinton’s Plan Fail To Address?

Clinton’s plan is currently focused almost entirely on taxes paid by high-income individuals. While she does have a “miscellany of small fry tax credits and rule/provision changes,” she has yet to address her “broader vision for what she wants taxes to look like,” reports Greenberg. He added that “she is deliberately choosing to not engage with the broader field of tax policy and the broader menu of options of tax reform that a lot of legislators are interested in.”

She also has promised tax relief for the middle class, but has so far failed to spell out exactly what that looks like.

“The Trump plan affects everybody. It’s very hard to imagine a single tax payer who wouldn’t be paying less in taxes under the Trump plan. There are tax cuts for the rich, the middle class, and for the poor. Really across the board tax cuts,” said Greenberg to TheDCNF.

Trump plans to raise the standard deduction rate to $25,000 for single filers and $50,000 for joint filers, reports the Tax Policy Center (TPC). His plan promises the lowest tax rate since before World War II, and to shrink the tax brackets from seven down to three.

He wants to eliminate the marriage penalty and the Alternative Minimum Tax, reports CBS Money Watch.

Trump promises to end loopholes and deductions for the wealthy, for example, to end “the carried interest deduction that benefits some ultra-rich managers of private equity funds.” He plans to limit itemized deductions except for charitable donations and interest on mortgages.

Trump has vowed to eliminate the estate tax, which he and other Republicans label the “death tax.”

Trump proposes a one-time tax for domestic businesses with trillions of dollars overseas, hoping to incentivize these companies to bring their foreign capital back to the United States.

The TPC concluded its report by stating that Trump’s plan would “boost incentives to work, save, and invest, and has the potential to simplify the tax code.”

“We estimate that the Trump tax plan would grow the economy by over 10 percent, somewhere around 11 percent. That is a level change not 10% a year. After all the economic effects faze in we expect to see the economy be 11 percent larger than it otherwise would have been,” reports Greenberg.

“As to how long it would take for the full effects of Trump’s plan, no one really knows,” Greenberg said. “We assume it’s about ten years. If you take that estimate as a good estimate, you would expect to see the economy grow about one percent a year under this Trump plan.”

Trump’s plan is not without its negatives. What these estimates don’t tell you are the massive deficits that would be incurred if the full plan was implemented. Greenberg sees Trump’s plan going one of two ways.

Either the deficit “will go up tremendously or Congress would need to find a significant area of federal spending to cut. Of course, the majority of federal spending is on Social Security, Medicare, other health programs, and defense. So if the Trump plan were enacted in full and Congress didn’t want the deficit to go up, they would almost certainly have to cut from one of those areas,” said Greenberg.

What Does Trump’s Plan Fail To Address?

What his plan fails to address are “any structural improvements in the tax code that you might make to increase efficiency or administrability or simplicity. His plan is more accurately characterized as a tax cut plan than a tax reform plan,” says Greenberg.

Greenberg concluded by saying that the “Trump plan is huge. There’s no other way to put it. There is good and bad to that. The effects of the plan will but huge both on the economy and the deficit.”