Things are tough all over: luxury cars abandoned in Dubai


A few short years ago, Dubai was the epicenter of conspicuous consumption. Its mammoth hotels, opulent resorts and over-the-top shopping centers represented the manifestation of man's insatiable hunger for energy. 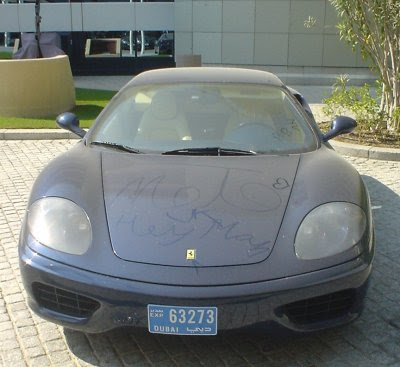 Today, with a global financial crisis underway and oil prices halved from their highs, even Dubai has fallen on hard times. As unemployment takes its toll, the number of abandoned vehicles has risen by 20%.

Luxury cars worth hundreds of thousands of dirhams can be found gathering dust on roadsides across Dubai, the remnants of the city-state’s economic boom that was brought to an abrupt halt by the global financial crisis. 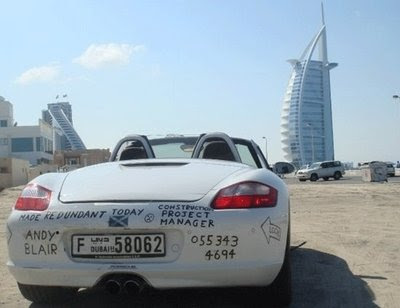 The financial crisis forced many companies to slash jobs and those made redundant who had taken advantage of easy credit during the boom found themselves unable to meet car payments... Dubai Municipality said 1,476 vehicles were recovered in the year to July 31, compared to 1,227 during the same period in 2008... 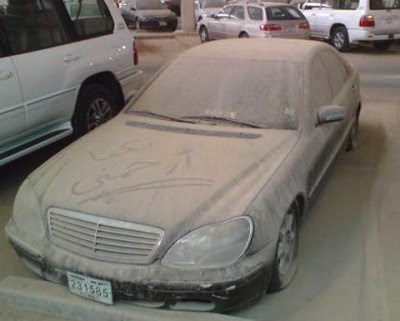 ...Throughout Dubai there are dust-covered cars with violation notices stuck to the windscreens, warning the owners that their vehicles will be removed in 15 days. Once removed the municipality stores them at the Al-Qusais scrap yard. 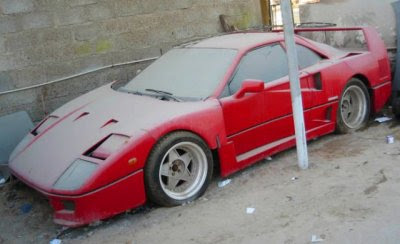 In a sand pit in one affluent Dubai neighbourhood, the Springs, a Land Rover Discovery sits motionless covered in dust with "another one bites the dust" written on a grimy side window... 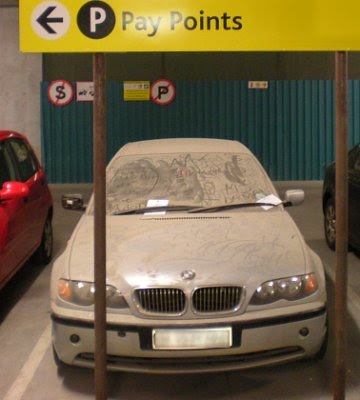 ...A few miles down the road in another residential district called Al-Barsha, a Porsche Boxster is parked with keys in the ignition. On the passenger seat are documents for a 144,000-dirham ($39,200) loan taken out at a Dubai bank. 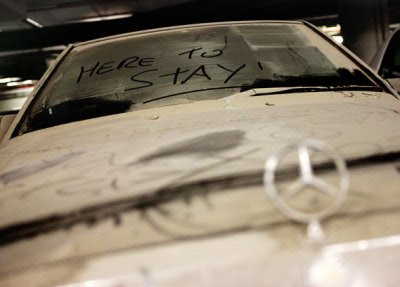 The number of vehicles that have been abandoned in Dubai as become the stuff urban legend, with rumours of thousands of cars being dumped at the airport as debt-laden, high-flying execs flee the emirate after losing their jobs in the global financial crisis... 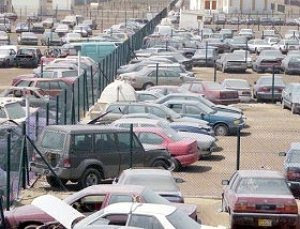 There is a "regular astonishing sight" at Dubai's international airport, says Mark Hollingsworth in ES Magazine: dozens of luxury cars – Mercedes, Porsches, BMWs, etc – abandoned with their keys still in the ignition. In some cases, notes of apology are taped to the windscreens.

The owners of these vehicles are mainly British expatriates, who have left in a hurry because they faced "crippling debts" as a result of Dubai's financial meltdown and their own profligate behaviour. Many of them, says Hollingsworth, have defaulted on loans; rather than risk arrest and jail, they drove at top speed to the airport where they jumped on the first flight to London.

And if you're looking for bargains, word has it that prices on used luxury cars dropped 40% from January to March.

Let me know how I can buy the blue ferrari.

I mean really this isnt news who cares who's struggling we are struggling as a world not just a country or a city.

Ferrari F40 is clearly a fake replica. Where the hell is the engine bay at the back, and why don't the lights fit...

Some of these aren't even abandoned cars, they're just the result of a dust storm.

That Ferrari is a fake. It's a Fiero with a body kit on it. Very commonly done actually.

I would imagine that none of these are 'abandoned' but like someone previously said they are the result of a dust storm. Well spotted on the F40, its an obvious kit car. If cars like this really were abandoned then they wouldn't be long sitting there before being nicked. Yet another 'true pictures, false scenario' blog.

The F40 is actually a Mitsubishi 3000 twin turbo with a kit!
Dubai Dave

After seeing this scenário, my question is: how much do these cars will cost if someone wants to sell it? OR it's just a case of getting there and take the cars out of there "simple as that"'

i want that porsche :)

This has been going on in the UAE for a long time - at least 20 years. If you lose your job, you have 30 days to get out of the country, and if you cannot sell your car, it gets left at the airport (that is if the bank is owed, otherwise lots of people ship cars back home in containers for about $3000-$4000). I would like to see the prices now - they were cheap by American standards 5 years ago.

The BMW is a right-hand drive car. Look closely at the wipers. My first time driving right-handed cars in the UK, the directions of the wipers and everything else being opposite made the experience quite trippy, lol. Anyway, point is that's not in Dubai. Most of the photos shown aren't in Dubai or the UAE.

blue ferrari is exported out of dubai, porche was a joke,ferrari replica is in sharjah, and scrap yard is in dubai. rest are Not in emirates.

You would not get far out there if you nicked one of them.
Off with your hands Ha Ha.
That's why they have the keys left in them.

are you dense? even if these cars are in Dubai, half of them are probably dusty due to the REGULAR sandstorms the region gets, being located on the edge of a desert. You dumb twit.

Just to let you know, the F40 is actually a replica. How do i know ???? Well i was actually one of the bidders on it when it was being sold. The kit is a now discontinued mould, taken straight from an actual F40, however, due to the shape and lines of the Fiero, it does look a little strange, to the untrained eye. Some would even say it is real, as did someone earlier on here, but i can categorically assure you, it is a replica. It was eventually sold to a guy in Belgium, who plans to use the body to make moulds and produce them as a kit for MR2's and Fiero's. It's actually a shame, as i saw the pics of it when it was first built, and it looked very very nice. If you look at the rear axle width, the ride height and the fitment of the rear hatch, it shows its a replica. It sold for 2,100 euro back in 2009.

Third picture. Dusty car. Surrounding cars are clean. That's not "just a dust storm." It's been there long enough to acquire the haze.

It may not be abandoned, but it's been there a while.

40k for a Porsche? Guess they aren't getting the U.S markup...

A lot of these pictures are not in Dubai that's true but I travel there for work every month and I fly into that airport and i can assure you the situation is very real. its not like it is in the US your car doesn't just get repoed, you go to jail. their banking system is basicly government run. So if you don't make your payment, your stealing from the government. Im lucky that my job isn't actually based in Dubai or I'd likely be in the same situation.