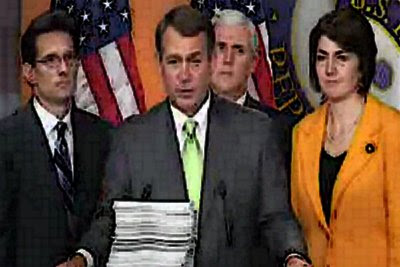 "Nineteen hundred and ninety pages. Now tell me how we're going to be able to fix our health care system with nineteen hundred and ninety pages of bureaucracy. This is what the American people have been saying for the last few months. Enough is enough. Republicans continue to have better solutions. If you go to healthcare.gop.gov, you can see the solutions we've been promoting."

Carbolic acid (A drops on string (B causing it to break and release elastic of bean shooter (C which projects ball (D) into bunch of garlic (E) causing it to fall into syrup can (F) and splash syrup violently against side wall. Fly (G) buzzes with glee and goes for syrup, his favorite dish. Butler-dog (H) mistakes hum of fly's wings for door buzzer and runs to meet visitor, pulling rope (I) which turns stop-go signal (J) and causes baseball bat (K) to sock fly who falls to floor unconscious. As fly drops to floor pet trout (L) jumps for him, misses, and lands in net (M). Weight of fish forces shoe (N) down on fallen fly and puts him out of the running for all time.

It may come as no surprise that Goldberg was a staunch foe of authoritarian governments and central planning. His depiction of one of FDR's ill-fated, depression-prolonging programs is an apt illustration for today's House Bill. 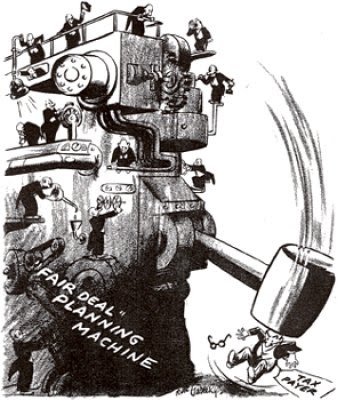 After seventy-plus years of failures -- economic disasters that endanger the full faith and credit of the U.S. currency -- you'd think that Democrats would start getting the point.

But maybe, just maybe, they're trying to destroy our society. I can't think of any other reason Democrats would attempt to pile on trillions more in debt when the federal budget is collapsing.


Hat tip: Jeffrey A. Tucker. Linked by: Don Surber. Thanks!