The Soros-funded front group MoveOn.org has announced its complete solidarity with President Obama's campaign to isolate and silence a mainstream news organization.

I just received this email from the anti-American, moonbat leftists I fondly refer to as MorOn.org. I think that's the name they prefer. Got Marx? 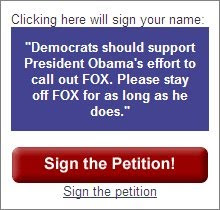 Now, President Obama is fighting back. The White House communications director said FOX is a "wing of the Republican Party...let's not pretend they're a news network." To draw attention to its biased coverage, President Obama will not appear on FOX for the rest of this year.

It's about time Democrats stood up to FOX! Can you sign this petition asking Democrats to support President Obama's stance by staying off FOX as long as he does? We'll deliver it to Democratic leaders. Clicking here will add your name:

The petition says: "Democrats should support President Obama's effort to call out FOX. Please stay off FOX for as long as he does."

Democrats often appear on FOX in hopes of reaching out to conservative viewers. But FOX cuts off their mic, distorts what they say, or runs biased headlines at the bottom of the screen...

...In the end, Democrats always lose on FOX.

That's because they have to face facts, logic and reason.

History treats the Democrat brand of Socialism very unkindly. And the hard left puppet-masters -- such as George Soros -- don't want arguments or criticism.

They want a chorus.

And that's precisely why Fox will continue to kick MorOn.org's a$$. They just haven't figured it out yet.