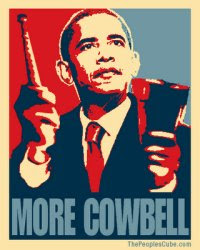 In his speech before Congress in September, President Obama claimed that 30 million Americans "cannot" get health insurance.

Yet the CBO analysis of the $829 billion Baucus Health Reform Bill revealed that it will leave 25 million Americans without health insurance.

So for $829 billion, using numbers from the President and the CBO, we can insure 5 million additional people. That comes to $165,800 per uninsured person.

Let me tell you about another government program gone awry. Taxpayers are on the hook for $75 billion to fund the "Home Affordable Modification Program" (or HAMP).

At first blush, HAMP seems to have some good ideas. It attempts to keep stretched borrowers in their homes. But a careful analysis of HAMP's effects by Dr. Housing Bubble demonstrate another government attempt at social engineering that will end with tragic (and catastrophic) results. 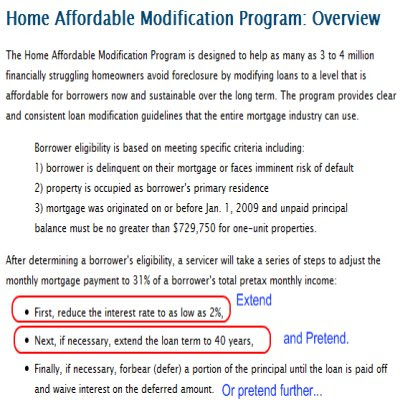 Having looked at the numbers, the Doctor asserts that the program was really designed to help the banks (can you say 'crony capitalism'?).

The terms of the HAMP program are bizarre: rates as low as 2% and terms extended to as long as 40 years. Furthermore, there is an "option of capitalizing principal to the note... in other words, these are option ARM-lites." 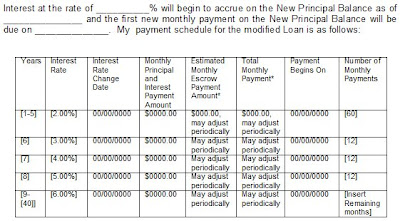 You read that correctly: these are basically the same insane mortgage programs ("pick-a-pay" option ARMs) that got us into this mess in the first place. And they are being hawked by the government again!

Three million mortgages are believed to be eligible for HAMP with 500,000 in a trial phase. The trial was supposed to last three months, but it has since been stretched to five months. 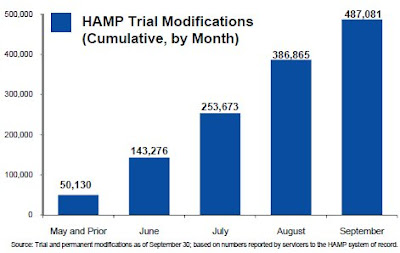 The Doctor believes that many of these "repaired" loans will simply re-default. Why? For one reason, the underwriting (courtesy of TurboTax Tim) for the program uses "stated income", not verified income.

These are the very same "liar's loans" that helped trigger the mortgage meltdown!

Examining the chart, of the 50,130 trial modifications entered into in May, only 1,711 (or 3%) resulted in a permanent modification!

As The Huffington Post reported a few days ago, the low number of permanent modifications is still appallingly low ("HAMP will come nowhere close to keeping up with foreclosures").

Among the reasons for the low conversion rate: failure to make timely payments (doh!), failure to assemble necessary documentation (like income verification), and other perfectly predictable screw-ups.

If we assume a conversion rate of nearly twice (5%) of the early trial HAMP modifications (we're being generous, I'm sure), we end up with some stunning figures: