From all appearances, Tim has waaay too much time on his hands; he instantly alerted us to this breaking news story: 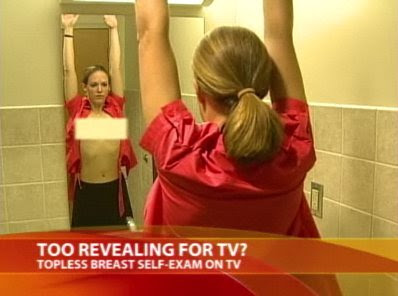 WASHINGTON – The ABC affiliate here is airing a two-part [Tim: two-part -- get it??] series that takes a close — and unobscured — look at breast self-exams. The series is airing during the fall "sweeps" period critical for a TV station's ad revenue, prompting concern by a parental watchdog group. But WJLA insists it's not just a naked attempt to boost the ratings.

The two segments include clinical demonstrations of self-exams, and the breasts of the two volunteers are not blurred. They were to air during the 5 p.m. and 11 p.m. newscasts Thursday and Friday.

WJLA officials said the segments are providing an important service because many women don't know how to properly check their breasts...

In the interest of decorum, I won't relay Tim's advice for females in his neighborhood.

at 7:11 PM
Email ThisBlogThis!Share to TwitterShare to FacebookShare to Pinterest
Labels: Healthcare, MSM