Foreclosures: Third quarter was "the worst three months of all time"


Stimulating news from CNN (via The Big Picture): it was the "worst three months of all time" for foreclosures: 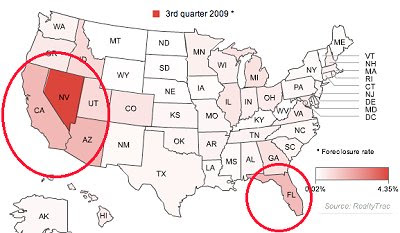 Despite concerted government-led and lender-supported efforts to prevent foreclosures, the number of filings hit a record high in the third quarter, according to a report issued Thursday... "They were the worst three months of all time," said Rick Sharga, spokesman for RealtyTrac, an online marketer of foreclosed homes.

During that time, 937,840 homes received a foreclosure letter -- whether a default notice, auction notice or bank repossession, the RealtyTrac report said. That means one in every 136 U.S. homes were in foreclosure, which is a 5% increase from the second quarter and a 23% jump over the third quarter of 2008.

Nevada continued to be the worst-hit state with one filing for every 23 households...

CNN also deserves applause as it is among the first mainstream outlet to report upon the "shadow inventory" (so termed by the exceptional Doctor Housing Bubble):

...in some low-price markets, lenders simply aren't following through on foreclosures, according to Jim Rokakis, treasurer for Cuyahoga County, Ohio, which includes Cleveland.

"They'll even set the date for the sheriff's sale, but they don't file the final papers," he said. "They hold it in abeyance and let the residents stay in the house." 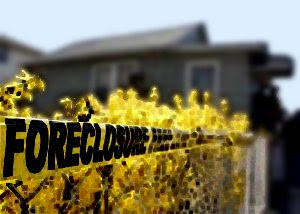 ...The bottom line here folks is as I have been hollering about for over two years: Banks and other institutions are carrying paper at FAR beyond its reasonable fair-market value - or that which it will EVER realize under any reasonable set of assumptions going forward.

Bluntly, we have institutionalized accounting fraud and the so-called "regulators" that are supposed to put a stop to and even prosecute these acts are willfully and intentionally ignoring them. The cities and towns across America are the big losers where these practices cause blight through intentional neglect while these "banks" claim to be in far better financial condition than is in fact the case...

Virtually everyone, including our regulators, has recognized the infirmity of these practices and written about it - newspapers, bloggers like myself, and even the OTS... Yet nothing has been done - not by The Fed, not by Congress, not by OTS and not by the FBI, even though accounting fraud is in fact a felony.

Put simply, the banks appear to be hiding their losses through a willful failure to take the losses.

And what entity was responsible for a whopping two-thirds of all bad mortgages? The federal government.

Yesterday, The Wall Street Journal's Peter J. Wallison offered a flabbergasting statistic: Almost two-thirds of all bad mortgages in our financial system were bought by government agencies or required by government regulations.

Who wanted these dicey loans? The data shows that the principal buyers were insured banks, government sponsored enterprises (GSEs) such as Fannie Mae and Freddie Mac, and the FHA—all government agencies or private companies forced to comply with government mandates about mortgage lending. When Fannie and Freddie were finally taken over by the government in 2008, more than 10 million subprime and other weak loans were either on their books or were in mortgage-backed securities they had guaranteed. An additional 4.5 million were guaranteed by the FHA and sold through Ginnie Mae before 2008, and a further 2.5 million loans were made under the rubric of the Community Reinvestment Act (CRA), which required insured banks to provide mortgage credit to home buyers who were at or below 80% of median income... 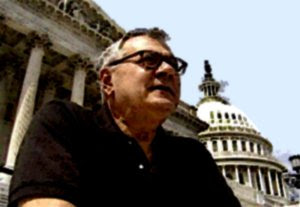 Thus, almost two-thirds of all the bad mortgages in our financial system, many of which are now defaulting at unprecedented rates, were bought by government agencies or required by government regulations.

...[Why?] The answer, of course, is that it was government policy for these poor quality loans to be made. Since the early 1990s, the government has been attempting to expand home ownership in full disregard of the prudent lending principles that had previously governed the U.S. mortgage market. Now the motives of the GSEs fall into place. Fannie and Freddie were subject to "affordable housing" regulations, issued by the Department of Housing and Urban Development (HUD), which required them to buy mortgages made to home buyers who were at or below the median income. This quota began at 30% of all purchases in the early 1990s, and was gradually ratcheted up until it called for 55% of all mortgage purchases to be "affordable" in 2007, including 25% that had to be made to low-income home buyers...

All that being said, what is even more shocking is that Senator Chris Dodd (D-CT) and Representative Barney Frank (D-MA) are still leading their respective Financial Services committees.

The Lord must have a sense of humor.

Update: "The Ongoing Cover Up of the Truth Behind the Financial Crisis May Lead to Another Crash".