I love the folks at CNSNews, instigators of some of the spiciest Beltway interviews in recent memory. House Speaker Nancy Pelosi was the latest, eh, victim. Asked whether the act of requiring every American to purchase a product or service -- in this case, health insurance -- Pelosi stammered a nonsensical response. 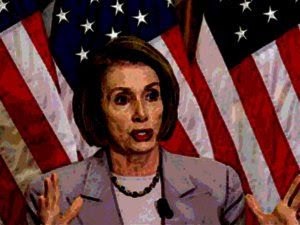 When CNSNews.com asked House Speaker Nancy Pelosi (D-Calif.) on Thursday where the Constitution authorized Congress to order Americans to buy health insurance--a mandate included in both the House and Senate versions of the health care bill--Pelosi dismissed the question by saying: “Are you serious? Are you serious?”

Pelosi's press secretary later responded to written follow-up questions from CNSNews.com by emailing CNSNews.com a press release on the “Constitutionality of Health Insurance Reform,” that argues that Congress derives the authority to mandate that people purchase health insurance from its constitutional power to regulate interstate commerce.

The exchange with Speaker Pelosi on Thursday occurred as follows:

CNSNews.com: “Madam Speaker, where specifically does the Constitution grant Congress the authority to enact an individual health insurance mandate?”

Pelosi then shook her head before taking a question from another reporter. Her press spokesman, Nadeam Elshami, then told CNSNews.com that asking the speaker of the House where the Constitution authorized Congress to mandated that individual Americans buy health insurance as not a "serious question."

Oh, Elshami, I beg to differ. It is a serious question. Just don't ask the whackjob Marxists at Think Regress:

Pelosi is right to be dismissive of the fringe right-wing theory behind this question, which has no basis in the Constitution itself. Article I of the Constitution gives Congress the power “[t]o regulate commerce... among the several states” as well as the authority to “make all laws which shall be necessary and proper for carrying into execution” its power to regulate commerce.-Een [sic] ultra-conservative Justice Antonin Scalia acknowledges that these constitutional provisions give Congress sweeping authority to enact laws that regulate “economic activity.”

By that standard, Congress could tax you at 100% and require you to wear stiletto high heels when playing basketball. 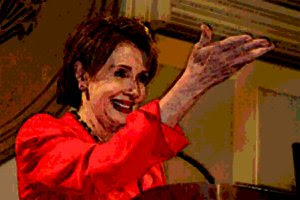 The colonies authored the Declaration of Independence because they rejected authoritarianism.

Pelosi's inability to articulate a semblance of a response speaks volumes.

Requiring every American to purchase a good or service is unconstitutional. It's never been done. It can't be done. And anyone who isn't a crackhead knows that.