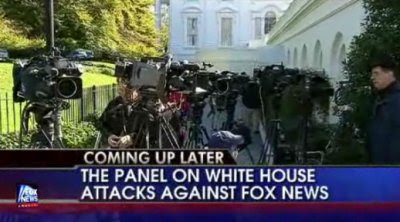 Today the White House stepped up its attack on Fox News, announcing that the network would no longer be able to conduct interviews with officials as a member of the Press Pool. The Pool is a five-member group consisting of ABC, CBS, CNN, Fox News and NBC organized by the White House Correspondents Association. Its membership is not subject to oversight by the government.

White House Press Secretary Robert Gibbs: We render opinion based on some their coverage and the fairness of that coverage. 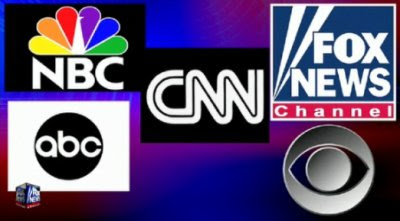 Tapper: That's a pretty sweeping declaration that they're not a news organization. How are they different from, say another, say ABC, MSNBC, Univision?

Gibbs: You and I should watch sometime around 9 o'clock tonight or five this afternoon.

Tapper: I'm not talking about their opinion programs. Or issues you have with certain reports. I'm talking about saying that thousands of individuals who work for a media organization do not work for a news organization. Why is that appropriate for the White House to say?

Gibbs: That is our opinion.

Carol E. Lee, Politico: Does that mean the White House doesn't believe they should be part of the press pool?

Gibbs: The press pool is decide by the White House Correspondents Association.

Lee: So you have no opinion on whether they should be ...

Gibbs: I'm not going to delineate for the White House Correspondents Association how the pool is conducted. That's not my job.

So the administration contradicted itself within 48 hours. That's about twice as long as normal.

Perhaps the White House will next try to pull Fox News' press pass.

That would be entirely consistent with the Hugo Chavez-style of government that President Axelrod and his advisers are trying to install.

I'm patiently waiting for the ACLU to stand up for freedom of the press and complain to President Obama about quashing Fox's First Amendment rights.

Update: Dan Riehl: "For the first time in my life I'm actually uncomfortable knowing that this guy has control of our military and Federal police forces. If he thinks he can simply shut down a member of the press on a whim, how long before he goes full Chavez?"

Update II: Hope for America has the video report.

IM is already there and with jabber really well done, why not define several additional personal information meta data and assign external urls/services what not to it, so you can browse your buddys and show all the information lotro gold from several different sources if you like (maybe even in a nice context based Mabinogi Gold plasmoid view). You could even get the relevant information Maple story mesos from other services (local and private ones) hidden from the IM service, but only mapped by the client to your addressbook.

so .. lots Wow Power Leveling of good things, but the whole “it sucks because our graphics Rom Gold layer Ragnarok Zeny sucks” thing has really got me by the balls.

When all the feathers are gone, when Buy Aion Gold the blue sky,aion power leveling we, white clouds, when grasslands are gone, Ling Po stood up,buy aion gold etc., his heart to absorb the magic Shiratori finished after the ready to set off for the fifth floor, just as the blue sky, white clouds of regret has been disappearing grassland ,buy aion gold making, and innate goodness was his burial. Yes, he has Aion Power Leveling figured out that several war down, all in all, just as it sounds exactly the same as if he did not kill those monsters, then Dofus Kamas this time he does not have the opportunity to stand up again .

I know this won't get through moderation, but just thought I'd ask if you're similarly outraged today?

I find it disheartening that while there are so many people that are already tragically lost in terms of being out of touch with reality, that we now have entire agencies that dare make claim to report the news, yet in the end, only twist and contort facts to suit their own opinion. The problem exists in that people are actually following Fox's version of reality. For the sake of humanity, Fox should really consider either getting out of the business altogether or to perhaps reinvent themselves as the "Alternative News Channel".