Wondering who gets what out of the Democrat Party's push for single-payer, socialized medicine? Keep tabs on all of the payoffs, bribes, swag and favors changing hands with this exclusive collection of ObamaCare™ Trading Cards! Collect 'em all! 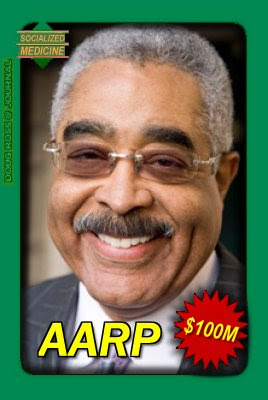 The AARP gets some serious coin: millions in taxpayer funds to help build their various businesses, which have little to do with looking out for seniors: "What Obama didn’t say is that AARP receives millions in federal funds, and hopes to get even more by becoming a vendor under his plan. In January 2007, NLPC published Special Report documenting taxpayer support for AARP. The study found that federal funding accounted for $83 million, or about 10 percent, of AARP’s then-annual revenue of $878 million." 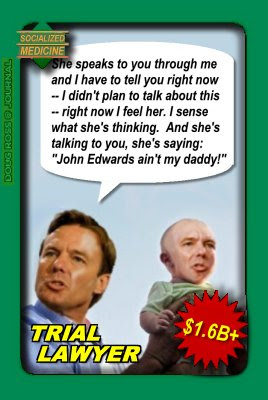 Trial Lawyer Tycoons look to get about a $1.6 billion payoff and an unlimited amount of rope to pursue malpractice lawsuits. That is to say, ObamaCare takes tort reform completely off the table. 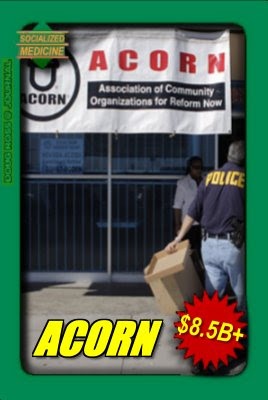 ACORN and other community agitators (whom, in part, are responsible for the entire mortgage meltdown) are slated to receive billions in Stimulus funds and billions from Obamacare. Consider it a quid pro quo for their, eh, energetic support of the Obama campaign. 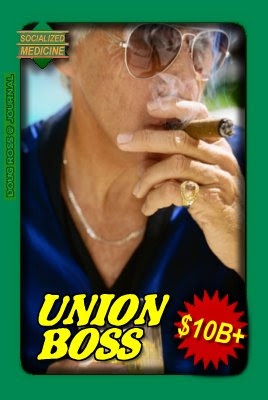 Union Bosses aim to get a direct $10 billion payoff from Obamacare, millions injected into their pension funds and, best of all, millions of new, dues-paying members as public-sector unions replace the evil insurance companies. And try getting one of those bureaucrats fired, I dare you! 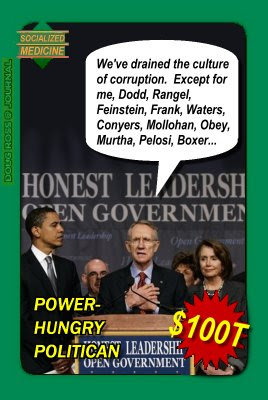 Unaccountable politicians -- who have come out and said they don't give a crap what their constituents think -- will amass more power, further breakdown the firewalls in the Constitution and then walk away. And where will Barack Obama, Nancy Pelosi and Harry Reid be in ten years, when the rest of us are struggling with a massive, out-of-control, federalized medical system that doesn't give a damn about individuals and is busy rationing care and denying care to the elderly? They will be retired as very wealthy individuals -- with their very own private health care -- having imposed their Marxist ideology upon this society and then walked away from it.

Leaving the massive deficits for our children and grandchildren to worry about. 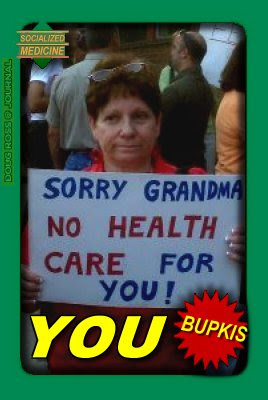 You? You get bupkis, which is to say: nuttin'. Oh, you will get called Nazis, thugs, racists, mobsters, and terrorists for having opposed socialized medicine.

But, as a bonus, you'll also lose your liberty -- you'll lose control of your very physical well-being -- to a useless, faceless board of unaccountable, numbskull bureaucrats who couldn't even run a cash-for-clunkers program.

But look on the bright side: you won't have that pesky Constitution and Declaration of Independence to worry about any more!