If you have a spare five or ten bucks, I'd encourage you to chip in to Doug Hoffman's campaign. Hoffman is running under the banner of New York's Conservative Party against uber-Liberal Dede Scozzafava.

Why the third party run? Hoffman is a Republican, but because this is a special election, there's no primary. It's a free-for-all. In a normal election, Scozzafava would've been crushed in the first round. As it was, she was hand-selected by three, hard-left county hacks.

[Fred Thompson] lists her absurd positions that are entirely out of sync with conservative values and normal Republican policy positions. For crying out loud, a huge chunk of her most recent donations came from abortion rights groups, labor unions and the NEA. 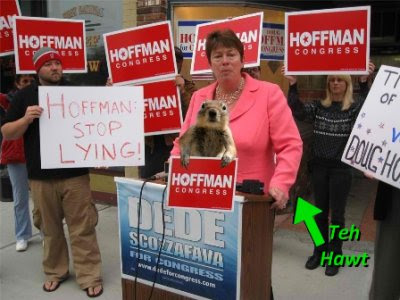 Card check? WTF? Oh wait, her husband, Ron McDougall, is president of the Jefferson, Lewis and St. Lawrence Central Trades and Labor Council and a member of the UAW... The same clown who called the cops when his wife the candidate felt "threatened" by Weekly Standard reporter John McCormack.

As for a third party? I can't and won't support one under normal circumstances, ever. It's political suicide on the national level. 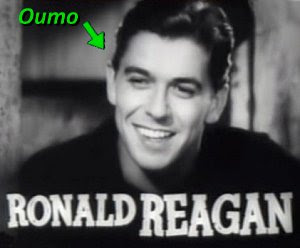 Ronald Reagan proved it. And if Teddy Roosevelt -- at the time, one of the best-known and well-funded candidates in history -- couldn't succeed in a third party, no one can.

Supporting a third party on the national level would simply guarantee that the Marxist agenda will continue unchecked. No: we must do what Reagan did: crush the Colin Powell set, the Lindsey Graham set, the John McCain set -- the incoherent, mumbling "moderates" who stand for nothing.

If Conservatism is to thrive, it must do so under the Republican banner. Anything less means another victory for the Crypto-Fascists.

And sorry about all of the green arrows and captions. Junior Cub Reporter Biff Spackle is supervising the Graphics Department and one of the interns thinks she's Perez Hilton.

Can anyone recommend the top Managed Service utility for a small IT service company like mine? Does anyone use Kaseya.com or GFI.com? How do they compare to these guys I found recently: N-able N-central remote environment manager