Democrats Admit: Our Health Care Bill Is a Cluster****

Just read between the lines of the 2,000-page ObamaCare bill and you'll find two stark admissions. Democrats are convinced that the bill will lead to an unmitigated catastrophe.

Admission 1: After months of proclaiming the "urgent" need for health care reform, PelosiCare doesn't actually kick in for at least three (3) years. 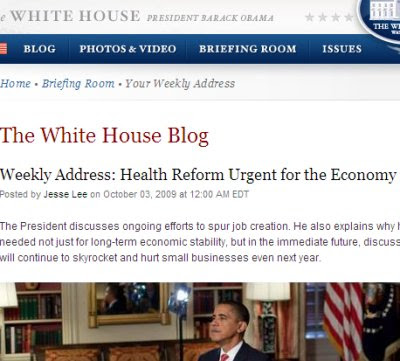 There are two reasons for the delay.

First, it's a tacit acknowledgment that prompt implementation would destroy Obama's reelection chances in 2012.

Second, it's an outright financial scam authored by the Statist Democrats: " The CBO has scored the bill at $1.055 trillion [which] does not take into consideration that fact that the ten-year window contains ten years of revenue and only three to eight years of major payouts –- meaning that the bill will bleed red ink [in subsequent years."

Admission 2: The only Americans not required to join the national health care program are -- wait for it -- members of Congress. Democrats are so certain that their own health would be endangered that they want no part of the disastrous Rube Goldberg contraption they've created.

* * *
"ClusterCare" is a $700 billion tax hike that will bankrupt the country as certainly as night follows day. It is 2,000 pages of pure horror: a perfect read for Halloween, but completely inappropriate for children, who must ultimately pay for this disaster.

Linked by: Ed Driscoll and Say Anything. Thanks!