My $1,000 Fox News Challenge to Lefties: Document Just One Lie 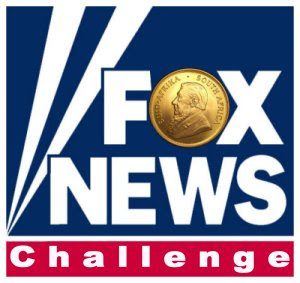 The Leftists have a lot of descriptions for the country's increasingly dominant cable news channel. They claim that Fox fabricates news stories.

I want them to prove it. And I've got a 1-ounce Kruggerand from my Y2K bunker* (today's spot price: $1,040) waiting for the first 'progressive' who can provide me with a documented lie repeated by Fox News reporters.

There are just four simple rules:

• The lie must have been repeated by at least two national Fox News reporters and left uncorrected.

• The transcripts and/or video clips must be available on the Fox News website for verification.

• The story, refuting the Fox News lie, must have been correctly reported at around the same time by news reporters from CNN and MSNBC (with links and/or transcripts from their sites).

Just one lie! That's all I'm asking for. This should be the easiest $1,000 you've ever made, libs. Just post your answer in the comments section along with your email address before November 3, 2009.

And given the devaluation of our currency by President Training Wheels, the Kruggerand could be worth $1,500 next week.

Fox News falsely claimed that the President had shirked in his duties in the National Guard, and in fact produced fake documents to back up their assertion!!!

Ok, I’ve got it! Fox News set out to prove a safety defect with some trucks. But when they couldn’t get the trucks to blow up, they rigged them with explosives. Oh, darn it, that wasn’t Fox News either?

Alright, how about when they made up accusations of American troops using chemical weapons against defectors in Vietnam? Oh dear – again this wasn’t Fox?

Linked by: Grand Rants. Thanks!

Really? Nothing to say about the video posted above, Doug?

Plenty more where that came from.

Dude -- did you bother to read the rules?

I'm sorry some stupid intern modified some graphics. Idiotic, but not a news reporter repeating a falsehood.

Where are the lies?

"ACORN had previously been tapped to help with low level data gathering for the 2010 census."

That is not true. All the data collectors are hired directly by the census bureau, backgrounds check, fingerprinted, and pass tests after two weeks of training.
I know this because I signed up via the Census Bureau's website & went through the training last summer.

That's two places. This one is less of a lie, but very misleading:
http://www.youtube.com/watch?v=tttaUpIZwaE

(side note: what's her problem with the ACORN guy reading?)

Here are the documents Judicial Watch points to: http://www.judicialwatch.org/files/documents/2009/Census_ACORN_Documents.pdf

As to the 'why does the Census Bureau need groups to help recruitment' question, many recent articles like this showing recruitment is low at least in some areas: http://www.brownsvilleherald.com/news/census-107198-bureau-recruitment.html

"The U.S. Census Bureau has terminated ACORN's involvement in its public outreach program"

FactCheck article on the question: http://www.factcheck.org/2009/06/acorn-and-the-census/

The article on FoxNews website using the term 'data collection' remains uncorrected, after I've emailed them requesting a correct many months ago.

Regarding my above, having ACORN no longer being a 'Partner' on the Census does not prevent them from encouraging their workers to apply for the Census.

I'm guessing the gold piece has been claimed... probably several times over by now.