Twitter really does have the most up-to-date news stories. 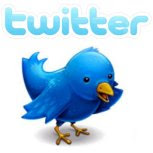 @directorblue: Breaking: President Obama vows that "all options are on the table" regarding administration's dealings with Fox News

@directorblue: Breaking: Secretary of State Clinton reports two-party talks "without preconditions" may be possible with representatives of Fox News

at 4:26 PM
Email ThisBlogThis!Share to TwitterShare to FacebookShare to Pinterest
Labels: Water-cooler