The Most Detestable and Menacing Political Hack in Washington 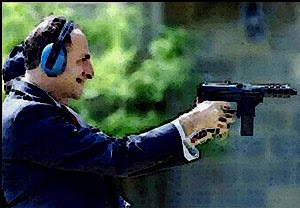 Well, there are a lot to choose from, but one in particular is the sleaziest of the lot. That would be none other than Chuckie "Welfare Queen" Schumer, senior dirtbag from New York.

And, according to Beltway insiders, the most dangerous place in the district is between Schumer and a camera. So... given the publicity surrounding the health care debate, Schumer's willingly acted as one of the most visible proxies for the National Socialist Democrat agenda.

[Schumer's] moves in the health-care game have been carefully strategized with the Obama White House, particularly Schumer's close ally from the 2006 electoral wars, Rahm Emanuel. So Schumer's tough talk last week about Democrats being prepared to pass a health-care bill without any Republican support was seen as delivering a message from Obama... [and] ...he's on record unequivocally promising to deliver a Senate health-care package that includes a public option

So why would anyone listen to a man who rejects the majority of the Bill of Rights?

To show you what a sleazebag Schumer is, he said Sunday he is fleshing out plans to use a backdoor process to ram socialized medicine down the throats of the American people.

In the last week, Democrats have begun to talk openly of using a procedure known as budget reconciliation to pass a health bill in the Senate with a simple majority, assuming no Republican support. To do that, under Senate rules, they would probably need to show that the public plan changed federal spending or revenues and that the effects were not “merely incidental” to the changes in health policy... 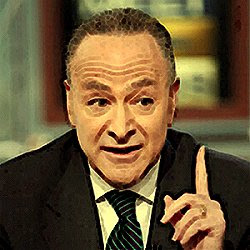 Now the reconciliation process is supposed to be a procedural process to work out differences between a Senate bill and a House bill. And he wants to abuse that process in order to get around the 60-vote filibuster rule in the Senate.

He wants to use that process to pass through massive, substantive legislation to transform 20% of our entire economy and turn it into an authoritarian, Soviet-style bureaucracy controlled by... Democrats. So Schumer wants to use a sleight-of-hand procedure so it isn't stopped by the normal legislative process.

Now consider: Schumer led the effort -- for the first time in American history -- to use the filibuster to thwart GOP judicial nominees! Such a sleazy move, it had never been attempted in American history! And over and over and over again, Schumer used the 60-vote requirement against the GOP majority. He used Senate rules to trump the Constitution.

Now, where Senate rules can legitimately be applied to the legislative process -- as opposed to the nomination and confirmation process --

You need 60 votes -- those are the rules that have been in place for decades! 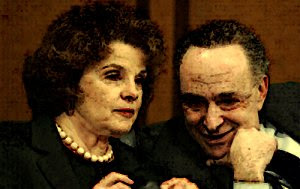 Schumer says, "let's get around the filibuster for legislation using the reconciliation process", so all we need is 51 votes.

And when it comes to judges, he promoted and used the filibuster, an unconstitutional and unprecedented maneuver, time and time again.

But when it comes to legislation, he wants to bypass the rules of the Senate and slam massive bills through the reconciliation process.

So you want to see the face of tyranny in the Senate? Where it doesn't matter who wins office, a man who will use any means -- constitutional or not -- to drive a tryannical agenda? Whether a representative government matters or not? With a complete disrespect for the legislative process and the American people?

You want to see the face of tyranny? In the United States Senate, it's the despicable and loathsome Chuckie "Welfare Queen" Schumer.

Go ahead and forward this to his offices and I'll see you in the reeducation camps.


Based upon: the Mark Levin Show, (download the MP3 here).