AutoExpress describes the rebirth of the legendary front-engined V8 GT.

Get ready for a blast from Porsche’s past! The German firm is developing a luxurious, front-engined grand tourer – a spiritual successor to the 928 built between 1977 and 1995. The ‘new 928’ will be a fifth model line, and is designed to sit above the sportier 911 in the range. 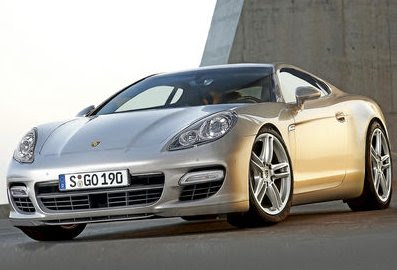 With the compact Boxster and Cayman, the 911, the Cayenne SUV and four-door Panamera, Porsche would appear to have most bases covered. But it’s notable for its absence in the front-engined GT segment. The newcomer will allow the brand to take on rivals such as the Ferrari 599 GTB, Bentley Continental GT and Aston Martin DB9. And our exclusive pictures show exactly why the curvy, Panamera-based coupé is set to stun the competition.

Essentially it’s a two-door, short-wheelbase version of the Panamera, which will help to spread the £1.1billion development costs of that model. Its front-engined layout has a number of inherent benefits, too...

...As you’d expect from Porsche, though, driver appeal remains a top priority. The engine line-up will mirror that of the Panamera, so a 4.8-litre V8, with or without a turbocharger, producing 500bhp or 400bhp, will be available. The naturally aspirated variant is set to come with four or rear-wheel drive, while the range-topping turbo model will be 4WD only.

...An Audi S4-sourced 369bhp 3.0-litre supercharged V6, coupled to a 38kW electric motor, will give the hybrid 928 fuel economy that breaks the 30mpg barrier. That will make it the most frugal petrol-powered Porsche ever, while still providing hair-raising performance...

at 7:38 PM
Email ThisBlogThis!Share to TwitterShare to FacebookShare to Pinterest
Labels: Autos