Presumably buoyed by the success of his domestic Stimulus program, President Obama has offered as much as $150 million to Muslim countries, which will be destined for 'new technology initiatives'. 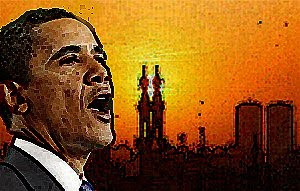 The White House Friday highlighted a new multi-million-dollar technology fund for Muslim nations, following a pledge made by President Barack Obama in his landmark speech to the Islamic world...

...As well as the fund, Obama also said he will host a summit on entrepreneurship this year to deepen ties between business leaders in the United States and Muslim communities around the world... In his speech on June 4, Obama vowed to forge a "new beginning" for Islam and America promising to purge years of "suspicion and discord."

...In what may be one of the defining moments of his presidency, Obama laid out a new blueprint for US Middle East policy, pledged to end mistrust, forge a state for Palestinians and defuse a nuclear showdown with Iran...

Meanwhile, one of the Muslim members of the Obama 'faith advisory council' is under fire for defending Sharia law and appearing on a terrorist supporter's television show. 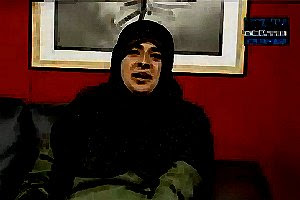 Dalia Mogahed, one of two Muslim members of President Obama's faith advisory council, has come under fire from conservatives for her early October appearance on a British television show connected with an extremist Muslim group. In a story headlined "Barack Obama adviser says Sharia Law is misunderstood," the Daily Telegraph reported earlier this month that Mogahed told the show: "I think the reason so many women support sharia is because they have a very different understanding of sharia than the common perception in Western media . . . . The majority of women around the world associate gender justice, or justice for women, with sharia compliance."

The television program, called Muslimah Dilemma, is hosted by a member of the Hizb ut Tahrir, a radical Muslim party in Britain. Mogahed, who is also the executive director for Gallup's Center for Muslim Studies, called in from the United States while another guest—a Hizb ut Tahrir representative—appeared in the studio...

During the Obama adviser's appearance, guests unleashed a stream of hateful rhetoric, according to The Washington Post.

[The show] was hosted by a representative of Hizb ut-Tahrir, which the State Department has condemned for an anti-Semitic, anti-Western ideology that officials said might indirectly generate support for terrorism...

During the 45-minute discussion on the show "Muslimah Dilemma," which is broadcast on a small British network, Nawaz, Ismail and callers variously condemned democracy, praised sharia law and advocated the restoration of the caliphate -- government inspired by Islamic law.

If these incidents are examples of the administration's "smart power" doctrine, freedom-lovers around the world would be well-advised to batten down the hatches for the next three years.

at 11:04 AM
Email ThisBlogThis!Share to TwitterShare to FacebookShare to Pinterest
Labels: extremism, Obama, War