Newt Gingrich: How Romney won "should sober every Republican in the country"

PJMedia's Tatler characterized Newt Gingrich's concessionary press conference in Nevada last night as "odd". I just watched it and don't agree. In fact, I thought one particular interrogatory was especially insightful (hat tip to Biff Spackle for the transcript):

Question: Mr. Speaker, have you considered that voters just aren't buying what you're selling? You've been on the ballot now in five states and you've won one, but you've lost four. And you also talk about debates, but you've had 18 of them and generally you've been considered to have done well in them, but still that hasn't shown up in the polls? 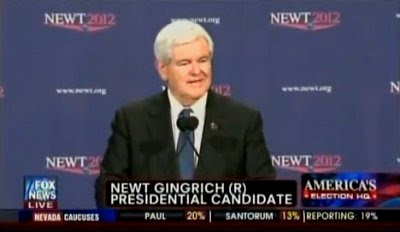 Gingrich: I'm not going to defend the outcome in a state where I was outspent five to one. And I'd suggest you're sophisticated enough to understand that the idea that taking a state where the other guy spent five times as much money, and many of his ads were false as by both the Wall Street Journal and National Review, that maybe that's not a very accurate measure.

When it was an entirely positive campaign, up through mid-December, I was ahead by 12 points in Gallup. And this may happen again. I was actually ahead in Gallup a week ago. So I think in a few more weeks, I'll be ahead in Gallup again.

Question: But is that just ignoring the reality of the campaign? He has gone negative, it's working...

Gingrich: So the "reality of the campaign", to use your words, is that he has gone negative and it is working. And what I am asserting to you is that, over time, I don't believe the American people will approve of a campaign which actually suppresses turnout.

If the only way Romney wins is suppressing turnout, how's he going to do that in the fall?

If the only way he wins is outspending someone five-to-one, how's that going to apply to a campaign against Obama, who's going to outspend him?

Those are damned good questions.

at 10:11 AM
Email ThisBlogThis!Share to TwitterShare to FacebookShare to Pinterest
Labels: Gingrich, Obama, Protecting America, Romney

The media on the right is now resorting to the selective logic tactics pioneered on the left. Claiming that Newt acted ‘strange’ or ‘rambling’ as the Fox panel and Matt Drudge would like for the public to believe is dishonest and is anything but subjective. Ihave deleted Drudge as a link on our 3 computers. I maybe watch Fox less than 2 hours a week now where before Beck left it was on all the time. Anyone notice how Thomas Sowell has been practically ignored over the last 3 months. Can't have people thinking sensibly now can we? Who would have imagined 1 year ago that there were cousins of the left's Obots. Romneybots!

IF YOU CAN'T STAND THE HEAT THEN GET OUT OF THE KITCHEN.

NEWT IS TURNING A SECOND RATE CAMPAIGN INTO A PERSONAL VENDETTA.

ROMNEY'S LIBERAL POSITIONS ARE DECADES OLD AND HE HAS STEADILY AND CONSISTENTLY MOVED RIGHT.

HE ENDORSED DEDE SCOZZAFAVA AND TRASHED RYAN AND MADE A TV COMMERCIAL WITH PELOSI RECENTLY.

MITT WAS THE FIRST TO ENDORSE AYOTTE AND HALEY AND RUBIO.

SANTORUM S MUCH MORE A CONSISTENT CONSERVATIVE THAN NEWT.

HECK: RICK COULDN'T DELIVER PENNSYLVANIA IF HE WAS THE VEEP ON ANY TICKET.

DEMINT OR JINDAL OR MCDONNELL...

Interesting that Reliapundit is attacking a poster and not the facts.
Romney has been liberal for decades. He has voiced conservative views when he has seen that people want to hear conservative views.
His actions speak differently.

Newt made some excellent points.
Romney has employed tactics that should not be employed against fellow candidates. Against BO, maybe - however, even then his antics are below acceptable for someone running for the position of President of this great country.

@ Anonymous - I have deleted Drudge and use the following in its place: http://badblue.bitnamiapp.com/trendr8.htm

I had stopped watching Fox when it began trending more left than balanced. Currently the only conservative host on the network is Hannity and even then they insist he has 'balanced' panels. Fox News is becoming like the alphabet channels.

Those who BLINDLY follow Romney need to think about what they have said about Obama's followers.

At least with Gingrich - we know what we are getting: He is not perfect, however he WILL fight for our country and turn it around. Romney is Obama-lite and will be milk toast.

Seriously? I thought Newt was this awesome politician, you know, the crafter of the 1994 "Contract With America"? Speaker is a position that carries a lot of heat, right? Or am I missing something?

If that's the case, why is he so whiny?