Because that's what would-be totalitarians do.

One of two people suspected of shattering 11 windows Tuesday morning at the state Democratic Party headquarters has an arrest record and a history of helping a Democratic political candidate, public records show.

Early Tuesday, Democratic Party chairwoman Pat Waak said the damage to her building in Denver's art district was a consequence of "an effort on the other side to stir up hate." She tempered her statement after Schwenkler's political history was revealed. 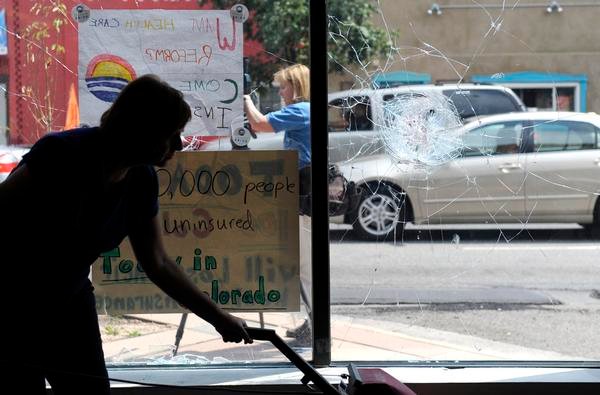 ...Schwenkler is charged with [doing an] estimated $11,000 in damage and could face a felony conviction.

...[He] received $500 in November 2008 to walk door-to-door in support of Democrat Mollie Cullom, who lost her race to Republican state Rep. David Balmer of Centennial... Schwenkler was one of dozens of paid canvassers bankrolled by the Colorado Citizens' Coalition, a political 527 committee...

...the vandalism might have been aimed at making the GOP look bad. "This sounds like the type of Democratic tactic from the left fringe trying to make Republicans look mean-spirited," Balmer said. "In this case, it blew up in their face. He was caught red-handed."

I post this because a desperate Obama administration may try the very same tactics again in 2012.


Update: Well, that was quick. Robert Stacy McCain describes just such a false-flag operation marketed by the loathsome Andrew Kaczynski.