GOT SKYNET? Legendary inventor Ray Kurweil's predictions for the next 25 years are a tad ominous

Ray Kurzweil is a legend in the scientific community, having pioneered the first text-to-speech reading machine for the blind, the CCD flatbed scanner, and the first large-scale voice recognition system. He's received 20 honorary doctorates and was appointed by Larry Page to lead artificial intelligence at Google.

In the new book BOLD by Peter Diamandis, Kurzweil reveals his predictions for the next 25 years. It's worth noting that an equivalent set of predictions, offered 25 years ago in 1990, turned out to be startlingly accurate (a computer would defeat the human chess champion by 1998, PC's would routinely operate over wireless networks by 2010, etc.).

By the late 2010s, glasses will beam images directly onto the retina. Ten terabytes of computing power (roughly the same as the human brain) will cost about $1,000.

By the 2020s, most diseases will go away as nanobots become smarter than current medical technology. Normal human eating can be replaced by nanosystems. The Turing test begins to be passable. Self-driving cars begin to take over the roads, and people won’t be allowed to drive on highways.

By the 2030s, virtual reality will begin to feel 100% real. We will be able to upload our mind / consciousness by the end of the decade. 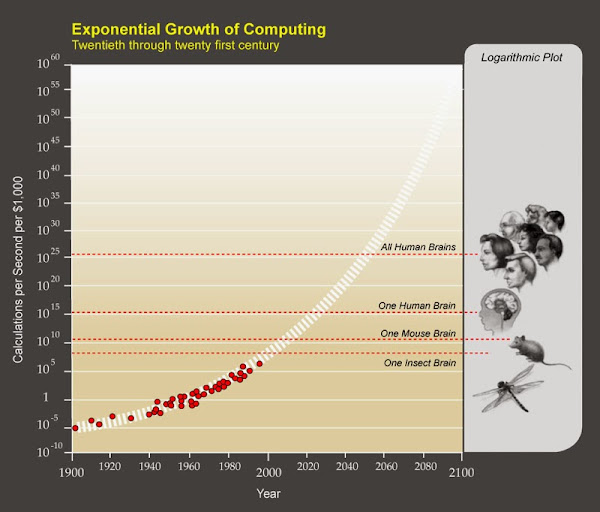 By 2045, we will multiply our intelligence a billionfold by linking wirelessly from our neocortex to a synthetic neocortex in the cloud.

The meta-theme of Kurzweil's predictions is that of exponentiality, extremely rapid growth (e.g., in semiconductor density, computing power, ...) in the overarching capabilities of man's inventions.

Which makes me think of Skynet.

As the wise man said, "May you live in interesting times."

at 8:55 PM
Email ThisBlogThis!Share to TwitterShare to FacebookShare to Pinterest
Labels: Engineering, Scitech

Kurzweil is wrong. His 1990 predictions were based on a robust Moore's Law. No longer. Moore's Law has run out of steam.

And one more thing: the human mind will never be able to "uploaded". Mark that down.

I'm not an EE, but these guys seem to think Moore's Law continues apace.

"This 'telephone' has too many shortcomings to be seriously considered as a means of communication. The device is inherently of no value to us." – Western Union internal memo, 1876

"Rail travel at high speed is not possible because passengers, unable to breathe, would die of asphyxia." – Dr. Dionysius Lardner, 1830


"I think there is a world market for maybe five computers." – Thomas Watson, chairman of IBM, 1943

"The horse is here to stay but the automobile is only a novelty—a fad." – -The president of the Michigan Savings Bank advising Henry Ford's lawyer not to invest in the Ford Motor Co., 1903

"Everyone acquainted with the subject will recognize it as a conspicuous failure." – -Henry Morton, president of the Stevens Institute of Technology, on Edison's light bulb, 1880

"No one will pay good money to get from Berlin to Potsdam in one hour when he can ride his horse there in one day for free." – King William I of Prussia, on trains, 1864

"There is no reason for any individual to have a computer in his home." – -Ken Olson, president, chairman and founder of Digital Equipment Corporation (DEC), in a talk given to a 1977 World Future Society meeting in Boston

"The wireless music box has no imaginable commercial value. Who would pay for a message sent to no one in particular?" – -Associates of David Sarnoff responding to the latter's call for investment in the radio in 1921

"There will never be a bigger plane built." – – A Boeing engineer, after the first flight of the 247, a twin engine plane that holds ten people

"The world potential market for copying machines is 5000 at most.” — IBM, to the eventual founders of Xerox, saying the photocopier had no market large enough to justify production, 1959

“The Americans have need of the telephone, but we do not. We have plenty of messenger boys.” — Sir William Preece, Chief Engineer, British Post Office, 1878

“When the Paris Exhibition [of 1878] closes, electric light will close with it and no more will be heard of it.” – Oxford professor Erasmus Wilson

A rocket will never be able to leave the Earth’s atmosphere.” — New York Times, 1936