A SIMPLE PLAN: How Obama and Hillary made the Arab world safe for radical Islam

Far from being "spontaneous" and "indigenous," the uprisings known as the "Arab Spring" that swept North Africa and the Middle East were long planned and planned from abroad with the Muslim Brotherhood's role hidden in plain sight. 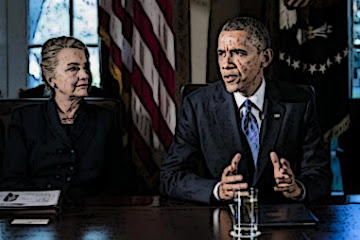 The Muslim Brotherhood was founded in Egypt in 1928 as a Sunni Islamist religious, political and social movement.  According to Lawrence Wright in his book "The Looming Tower," its founder Hassan al-Banna "rejected the Western model of secular, democratic government, which contradicted his notion of universal Islamic rule." The fundamental goal of the Muslim Brotherhood remains Islam's global domination, an effort that quickly turned violent and eventually spread to over eighty other nations. For example, one Muslim Brotherhood splinter group was responsible for the 1981 assassination of Egyptian President Anwar Sadat for his peace treaty with Israel and another offshoot is the terrorist organization Hamas.

Barack Obama clearly supports the Muslim Brotherhood as a so-called "moderate" alternative to more violent Islamist groups like al Qaeda and the Islamic State, and a vehicle for political reform in the Middle East and North Africa, as outlined in the secret 2011 directive called Presidential Study Directive-11, or PSD-11.

In addition to a wide-spread infiltration of the Muslim Brotherhood into the Obama Administration, Hillary Clinton's longest serving assistant, Huma Abedin, has enjoyed an intensely close relationship with the Brotherhood for decades. Her father, Zyed Abedin, served as editor of an anti-Semitic journal funded by an Islamist; her mother, Saleha Mahmood Abedin, replaced him as editor in 1993 when he died. As editor, Saleha has promoted the Muslim Brotherhood violent jihad and the "right" of women to be repressed under sharia.

Therein rests the motivation for the policies formulated and actions taken by Barack Obama and Hillary Clinton in Egypt, Libya and Syria, all of which led to the growth of radical Islam in North Africa and the Middle East.

In terms of US foreign policy and national security, the role of Hillary Clinton in the Libyan fiasco was as reckless as it was cataclysmic.

Clinton was among the most vocal early proponents of using U.S. military force to topple Libyan dictator Moammar Gadhafi, claiming erroneously that Gadhafi was about to engage in a genocide against civilians in Benghazi, where the Islamist rebels held their center of power.

Even Obama bowed to her leadership on the issue, privately informing members of Congress that Libya "is all Secretary Clinton's matter."

Yet according to Jeffrey Scott Shapiro and Kelly Riddell of the Washington Times:

"Top Pentagon officials and a senior Democrat in Congress [Dennis Kucinich] so distrusted Secretary of State Hillary Rodham Clinton's 2011 march to war in Libya that they opened their own diplomatic channels with the Gadhafi regime in an effort to halt the escalating crisis, according to secret audio recordings recovered from Tripoli."

The Pentagon liaison to Col. Moammar Gadhafi's son, Seif, indicated that Army Gen. Charles H. Jacoby Jr., a top aide to then Chairman of the Joint Chiefs, Admiral Michael Mullen, "does not trust the reports that are coming out of the State Department and CIA, but there's nothing he can do about it."

Despite these concerns, the Obama Administration, on March 17, 2011, supported U.N. Security Council Resolution 1973 for military intervention in Libya. On that day Clinton ordered a general within the Pentagon to refuse to take a call from Gadhafi's son Seif and other high-level members within the regime, to help negotiate a resolution. A day later, on March 18, 2011, Gadhafi himself called for a cease-fire, another action the administration dismissed.

In released, but redacted emails, Clinton expressed interest in arming Libyan opposition groups using private security contractors, though at the time, the opposition was not formally recognized by the U.S. or United Nations, which prohibited arming without following strict guidelines and oversight. In an April 8, 2011 email to her then-deputy chief of staff, Jake Sullivan, Clinton wrote: "FYI. The idea of using private security experts to arm the opposition should be considered," attaching an intelligence report from adviser Sidney Blumenthal, her preferred source of intelligence.

It now appears probable that, in 2011, at Clinton's urging, Obama secretly approved the arming of rebels in Libya and Syria via a third party, likely Qatar, the only Arab nation at the time that recognized the rebel government and brokered the sale of more than $100 million in crude oil from rebel-held areas.

Many of those weapons would ultimately be destined for Syria.

Through shipping records, Fox News confirmed that the Libyan-flagged vessel Al Entisar, which means "The Victory," was received in the Turkish port of Iskenderun -- 35 miles from the Syrian border -- on Sept. 6, 2012, five days before the Benghazi terrorist attack. The cargo reportedly included surface-to-air anti-aircraft missiles, RPG's and Russian-designed shoulder-launched missiles known as MANPADS, all believed destined for Syrian rebel groups.

Both Obama and Clinton had a vested interest in lying about Benghazi and permanently concealing the truth; Obama to ensure his reelection prospects in 2012 and Hillary to protect hers for 2016. It is significant, however, that Clinton was the most aggressive administration official promoting the arming of the Libyan Islamists and the first to associate the video with the Benghazi attack (see timeline) as well as its most vigorous and persistent advocate.

A Defense Intelligence Agency (DIA) report presented in August 2012 and declassified in May 2015, stated that "the Salafist, the Muslim Brotherhood, and AQI [Al- Qaeda in Iraq] are the major forces driving the insurgency in Syria," being supported by "the West, Gulf countries and Turkey."

"The present Shia-Sunni civil war in Iraq was fueled by American abdication of a foreign policy in Syria, where we sub-contracted our interests to Saudi Arabia, Qatar and Turkey. Instead of dealing directly with the moderate Free Syrian Army, we outsourced the funding and arming responsibilities.

They then pursued their own interests; the Saudis supporting radical Islamic Salafis, while the Turks and Qataris backed the Muslim Brotherhood, all of which was at least partially meant to counter growing Iranian influences in the region, but complicating America's anti-terrorism efforts."

An interview with retired Lieutenant General Michael Flynn, former head of the DIA, given to Al Jazeera's Mehdi Hasan, confirms earlier suspicions that Washington was monitoring jihadist groups emerging as an opposition in Syria. General Flynn dismissed Al Jazeera's supposition that the US administration "turned a blind eye" to the DIA's analysis, stating: "I think it was a decision. I think it was a willful decision."

The disintegration of Libya and the rise of ISIS can rightfully be placed at the doorsteps of Barack Obama and Hillary Clinton.

History will prove that it was not just incompetence, but criminal negligence in the conduct of foreign policy and the safeguarding of American lives.

The thing that got weird though is that ever since the fall of Egypt (and I wonder what Hillary's role was in that), barack has been doing a LOT more for the Shiah and angering the Sunni Muslims.