FOR "WOMEN’S HEALTH": Human Fetus Brains Sold to Labs for Transplantation into Rats 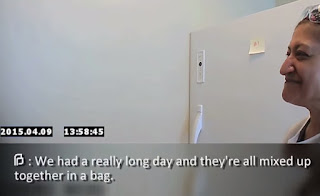 One thing is clear from the videos and media that have emerged in this recent scandal – we are not dealing with a one dimension “pro-choice/pro-life” debate. Instead, there is a dark organization inside an industrial complex Americans have not dared to contemplate or uncover. Secret scientific research, genetic engineering, synthetic DNA, vaccines made from human fetal cell tissue… and a host of other uses for human organs, limbs, brains and tissue.

The “ethics” behind closed doors, where doctors and clinics are apparently all too willing to break the rules and allow human experimentation, are projected into the medical system collective that we are all being pushed into. Decisions about the value of human life and how far the State can go in deciding what is best for you are being weighed… your will see it in the hidden costs of Obamacare, where life becomes cheap but the bills for services rendered remain sky high.

While the Planned Parenthood harvesting scandal rumbles on, fewer news items have actually focused on what those who procure aborted fetal tissue and organs are actually doing with it.

Pro life website LifeNews.com sheds some light on this today with a piece that reveals the brains of aborted babies are being transplanted into mice.

The article notes that a recent commentary piece in The Scientist, entitled “When Does a Smart Mouse Become Human?” highlights how researchers at the University of Rochester injected lab mice with glial cells from human fetuses, and discusses the ethical issue of transplanting human cells into animals.

Glial cells are cells that support neurons in the nervous systems. The mice incorporated these glial cells into their brain and “outperformed normal mice almost fourfold in a variety of cognition tests.”

The researchers stressed that the mice still had mouse brains, saying “This does not provide the animals with additional capabilities that could in any way be ascribed or perceived as specifically human. Rather, the human cells are simply improving the efficiency of the mouse’s own neural networks. It’s still a mouse.”

The article then goes on to reveal that the Glial cells were obtained from second trimester abortions (18–22 weeks), citing a paper in the Journal of Neuroscience.

The forebrain ventricular/subventricular zones were dissected from the brain, the samples chilled on ice, minced and dissociated using papain/DNase, as described previously (Roy et al., 1999, 2000), always within 3 h of extraction. The dissociates were maintained overnight in minimal media of DMEM/F12/N1 with 10 ng/ml bFGF. Samples were deidentified and obtained with the approval of the University of Rochester Research Subjects Review Board.

While attempting to create super mice in a lab might be appealing to some, and could definitely have merit in that it may shed further light on human neurological disorders, Life News’ Rebecca Taylor makes a good point, noting that “I can confidently say that the mice did not need the human brain tissue as much as the baby did.”

Taylor notes that glial cells for the research could have been sourced ethically from natural miscarriages.

Farrell also admits that she and her co-workers find it “fun” to dissect dead fetuses for parts.

“It would be exciting too if you needed it dissected, because LaShonda and I are the most Curious George of the group,” Farrell says. “I know it’s sickening on some level, but it’s fun.”

“It’s just that those of us who are into medicine and nursing, things that other people find gross, we enjoy. Obviously.” Farrell adds in the stomach churning footage.

While she is happy to pick apart the brains of dead babies, Farrell says she draws the line at handling other people’s boogers, however.

“That’s my- I can’t do it, I could never be a respiratory therapist, I could never, that’s why I have one child. I can’t do it, anything that comes out of the body from here down, I’m fine. I can hold the bucket if you’re throwing up but please don’t sneeze on me.” she tells the undercover investigator from the Center for Medical Progress (CMP).

The leader of the CMP told CNN “New Day” last week that biomedical companies and abortion unions are trying to silence CMP because they are “very scared” of footage coming out that will prove intact fetuses were provided to them by Planned Parenthood. David Daleiden explained that this could mean babies were born alive before being “aborted” and having tissue and organs harvested.

CMP is being legally represented by the American Center for Law and Justice (ACLJ), which is attempting to have restraining orders by the National Abortion Federation (NAF) and biomedical company StemExpress overturned in federal court.

“This lawsuit by the NAF is an unwarranted attack on the First Amendment and must not be permitted to stand.” a statement by ACLJ notes.

“We are confident that this lawsuit by NAF will not succeed and our clients ultimately will be able to release the complete findings of their investigative report.” the statement continues.

“We’ll be back in federal court in the days and weeks ahead to defend CMP as it exposes Planned Parenthood and the abortion industries deception and destruction of life.” it concludes.

These staffers at Planned Parenthood show the dame detachment from the babies they have extracted as the Nazis showed to the inmates of their death camps. Both organizations had the same purpose- to make as much profit by the deaths of humans as possible. This is the literal "liquidation" of humans. In the case of the Nazis, the cause was to improve the human race. In the case of Planned Parenthood, it is for "women's health". Never mind the cost in the lives of those not worthy to live.

Every woman working in PP must be treated as they treated Vietnam Vets - by spitting in their faces and calling them Baby Killers.