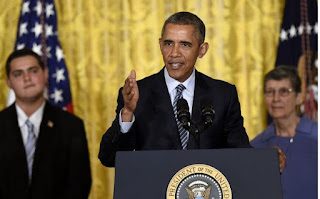 AND THE PROPOSALS JUST KEEP ON COMIN': President Obama announces the details of the Clean Power Plan at the White House, August 4. It’s one of a series of plans the administration has announced this year through the Environmental Protection Agency.
With just 17 months left in his final term, President Obama seems more determined than ever to have the Environmental Protection Agency put in place a slew of the country’s most ambitious environmental standards.

But critics from the business community say the new rules will come at a hefty cost for consumers and argue some of the regulations aren’t even necessary.

“It certainly seems as though they’ve saved some of their biggest regulations for the end of this administration,” said Greg Bertelsen, director of energy and resources policy at the National Association of Manufacturers. “We’re less focused on the motivations behind the regulations than we are on the impacts on manufacturers.”

EPA insists all the new and proposed rules are needed to protect public health and meet the Obama administration’s goals to reduce greenhouse gas emissions to combat climate change.

“What this proposal shows … is just how serious this administration is about putting real concrete measures in place to reduce emissions of harmful CO2 and methane,” Janet McCabe, acting assistant administrator for EPA’s Office of Air and Radiation, told reporters on a conference call regarding the methane rule.

All told, EPA and the Obama administration have announced proposals for at least five measures in recent months:

Just last week, EPA proposed rules aimed at reducing methane emissions at oil and natural gas facilities by 40-45 percent over the next decade from 2012 levels, part of meeting Obama’s environmental goals and establishing his legacy. The agency says the proposal is a “common sense plan” to reduce methane, which EPA estimates to have 20 times more of a warming effect than carbon dioxide.

But industry interests say even though natural gas production has jumped dramatically in recent years in the United States, methane levels are already on a downward trend: 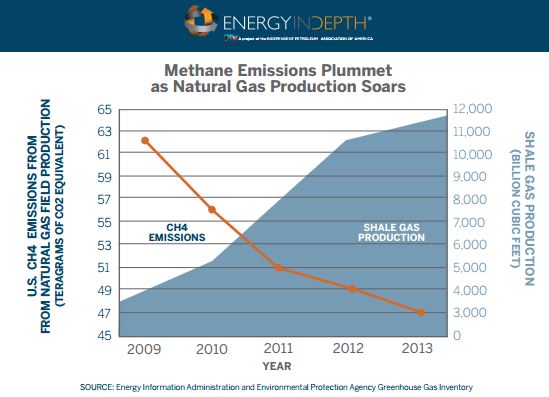 Charles Drevna, distinguished senior fellow at the Institute for Energy Research, a nonprofit that calls for free-market solutions to energy and environmental issues, called the methane proposal “more unnecessary than wearing suspenders with a belt.”

“This is something the (oil and gas) companies want to capture because they don’t want to leave money on the table,” Drevna said. “It behooves them to do it.”

On the same day as the proposed methane rule was announced, in a move that received much less attention, EPA proposed clarification on what’s called “aggregation” of air permitting rules for oil and gas sites — which the industry complains will make energy production more expensive.

Just two weeks prior to the announcement of methane rules, the Obama administration and EPA finalized the Clean Power Plan, marking the first federal measure to regulate carbon dioxide emissions from the nation’s existing power plants.

Obama called the Clean Power Plan “the single most important step America has ever taken in the fight against global climate change.”

“You’d think the ink would have dried on the proposal for the Clean Power Plan before they came out with something else but, gee, within two weeks, here we are,” Drevna told Watchdog.org. “What’s going to happen in the next two weeks?”

Waters of the United States

In late May, EPA and the Army Corps of Engineers released stricter enforcement measures for the Waters of the United States rule, with EPA Administrator Gina McCarthy saying, “Protecting our water sources is a critical component of adapting to climate change impacts.” Critics in agriculture and oil and gas complain the new rule amounts to a federal power grab that is way too broad.

By Oct. 1, EPA is expected to announce its final rules for ozone pollution, cracking down more stringently on surface-level ozone — from 75 parts per billion to 65 or 70 parts per billion. EPA says it’s a matter of public health but opponents have estimated that lowering the ozone levels to 65 parts per billion would put more than half the country out of compliance, thus making the rule very expensive to implement.

The Nation Association of Manufacturers told Watchdog.org earlier this month it’s rolling out a “multi-million dollar” media blitz in markets across the country to fight the proposed ozone rule. NAM has already run TV ads in Washington, D.C. and Colorado.

“The challenge with this regulation is that now we’re to a point where all the low-hanging fruit is gone,” Bertelsen told Watchdog.org in a telephone interview. “The cost per unit of reduction increases and that drives the costs up, but even more worrisome is that in many cases there aren’t technologies to meet the standard.”

Bertelsen wouldn’t say if NAM plans to file lawsuits against EPA, but a number of states — especially energy-producing states such as West Virginia — have planned or have filed legal action.

“Get with the times,” Bravo told Watchdog.org in a telephone interview. “Look forward, look to renewables, look to safeguarding our natural resources and ensuring the health and welfare of your people rather than pocketing the money in the few wealthy people in your states in the extractive industries. Be forward-looking. Use your money, rather than to file lawsuits, to transition. Have some vision.”

“We’re going to have to do things a little bit differently. We’re going to have to have more public transportation infrastructure and use more public transportation … We can’t continue in the consumer-driven world that we have been in for the past hundred years,” she said. “It may cost a little bit more money in the beginning, but in the long run it will save on clean-up and health. It’s not a question if we can do it; we have to do it.”

Using the IRS, you can intimidate and perhaps silence your political opponents.
Using the EPA, you can get your political opponents to donate to your campaign!
"You need an exemption from this regulation?" "Your think it's unfair we're subsidizing your business competitor? Did you know he donated to our party?"
Yet, it's cute they still report Obama wants these regulations because he cares about the environment. Yeah, right. The most malevolently hyper political president ever doesn't have a political motivation, he's doing this out of the goodness in his heart.