Spotted this interesting nugget over at Every Joe, which I hadn't heard from our favorite cable news network (via BadBlue Real-Time News).

Even though Donald Trump claimed victory after the first GOP debate based on internet polls, many experts said to wait until more scientific polling numbers were released to make a definitive judgment. And now we know why. An NBC poll was released and it paints a completely different picture. 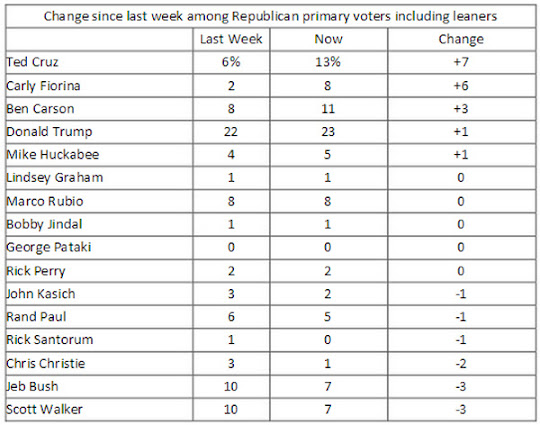 In terms of which candidates helped themselves the most, the winners were Ted Cruz and Carly Fiorina. Cruz rose from 6% to 13%, while Fiorina climbed from 2% to 8%... Those surveyed pointed to three candidates doing the best work during the debates: Fiorina (20% net score), Marco Rubio (12%) and Cruz (11%).

The news wasn’t all bad for Trump. At 23% of the vote, he’s still leading the way overall (Cruz is now second at the aforementioned 13%). Additionally, 18% of those surveyed believed he did the best job in the debate. Unfortunately for The Donald, 29% thought he did the worst job, which gave up an ugly net score of -11%.

The other candidate who should be happy with these polling numbers is Dr. Ben Carson. He rose from 8% to 11% overall, which is third place behind Trump and Cruz. Additionally, he tallied a net score of 7% in the debate.

In fact, Cruz was quoted as saying that fundraising has "exploded" since the debate, with over 250,000 donations at an average of about $68 apiece.

I wholeheartedly endorse Ted Cruz for president (you can see each candidate rated on the issues here). If you are so inclined, you can help his campaign effort out by clicking here.

For those folks to young to have voted for Reagan, wouldn't it be awesome to offer the rising generations an opportunity to vote for a true Constitutional Conservative?