A rancher is taking the Environmental Protection Agency to federal court, asking a judge to stop the agency from fining him more than $16 million because he built a small pond on his property. 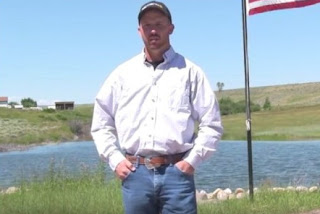 Andy Johnson of Fort Bridger, Wyoming says he made sure to get the proper permits from his state government before building the pond. After all, this is America in the 21st century, and nothing done on your own property — certainly when it involves the use of water — is beyond government concern.

Johnson is facing millions in fines from the federal government after the EPA determined his small pond — technically a “stock pond” to provide better access to water for animals on his ranch — is somehow violating the federal Clean Water Act.

“We went through all the hoops that the state of Wyoming required, and I’m proud of what we built,” Johnson said. “The EPA ignored all that.”

In a compliance order, the EPA told Johnson he had to return his property — under federal oversight — to conditions before the stock pond was built. When he refused to comply, the EPA tagged Johnson with a fines of $37,000 per day.

Dismantling the pond within the 30-day window the EPA originally gave him was “physically impossible,” Johnson said.

That was in 2012. Today, Johnson owes the federal government more than $16 million, and the amount is growing as he tries to fight back.

In a lawsuit filed in the U.S. District Court on Thursday, lawyers representing Johnson argue the EPA overstepped its authority by fining the rancher.

“Threatening me with ruinous fines even though I’ve done nothing wrong is extortionate,” he said in a statement provided by the Pacific Legal Foundation, a nonprofit law firm representing Johnson. “This is a battle about more than my land, my livestock and my pond. The EPA is on a mission to expand its power. They want to take over jurisdiction over private property throughout the United States.”

The EPA did not return a request for comment on the lawsuit.

The fine issued to Johnson is stunning on its own, but other aspects of the EPA’s behavior are difficult to understand.

For one, they’ve not yet explained how Johnson’s small pond is a violation of the Clean Water Act — only that it is.

Surprisingly, that’s not all that uncommon, said Johnathan Wood, a staff attorney at PLF who spoke to Watchdog about the case.

RELATED: Mine owner says EPA has record of toxic dumping that goes back to 2005

In many cases, the details of the EPA’s consent orders aren’t revealed unless someone files a lawsuit challenging them, he said.

But the EPA’s action against Johnson is even more difficult to understand because Congress has specifically exempted stock ponds — like the one Johnson built, intended to provide water for animals — from regulations under the Clean Water Act.

Passed in 1972 but updated several times, the Clean Water Act gives the EPA the authority to regulate surface water in the United States for the purposes of reducing and eliminating water pollution. One of the exemptions written into the law is for the “construction and maintenance of stock ponds.”

“Under the plain terms of the Clean Water Act, he was entirely within his rights and didn’t need federal bureaucrats’ permission,” Wood said.

In a statement provided to AgFax.com, an agricultural journal, in March 2014, the EPA acknowledged the exemption for stock ponds but said that didn’t matter in this case. Johnson’s pond exists within the “stream channel of Six Mile Creek,” a small waterway that eventually feeds into the Green River in western Wyoming, the EPA says.

“The issue is whether Mr. Johnson qualified for the stock pond exemption. To qualify for this exemption, the pond must actually be used in farming or ranching operations, and it is only exempt to the size the farmer requires it to meet operational needs,” the EPA statement said, according to AgFax. “Ponds created for aesthetic or other non-farming-related purposes do not qualify for the exemption.”

Essentially, the federal government gets to decide how much water you need for your ranch.

The case could take months, or even years, to work its way through the federal court system.

As it does, the fines will continue piling up.

Here’s the biggest kicker: Johnson and PLF’s attorneys say the creation of the pond actually improved the environment.

It created a wetland, where previously there was only a small creek. The pond not only provides a habitat for Johnson’s own animals but also a habitat for eagles, moose and other wildlife. Water exiting the pond is actually cleaner than the water flowing into it, according to tests by an independent environmental lab and included as part of the lawsuit.

Johnson says he’s been trying to explain this to the EPA for more than a year — supplying it with reports on the environmental benefits of the pond and getting state officials to confirm his pond complies with their permits.

Even Wyoming Gov. Matt Mead is behind him. In a statement, Mead called the EPA’s fines “heavy-handed.”

Dont back down, Mr. Johnson. Trump is coming soon !!!!

I think $16 million in fines goes under the cruel and unusual column.