Here is a complete list of all of the differences between Socialists and Democrats: _________.

Sometimes what’s not said in response to a direct inquiry is more noteworthy than what is said. When the chairman of the Democrat National Committee was asked recently what the difference between a Democrat and a Socialist was, she sidestepped the issue and went a totally divergent direction. It would have provided a valuable service if she’d answered the question directly, for there seems to be no substantive distinction. 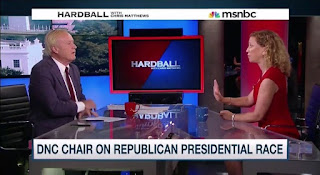 A little later, NBC’s Chuck Todd, on “Meet the Press,” asked the same question, which she responded to very similarly, choosing to answer a question not asked. But when the Matthews interview is looked at contextually, she may have already answered the question, when she called Bernie Sanders “a good Democrat.”

That’s a significant statement even at face value, for Bernie Sanders, the junior senator from Vermont, and a Democrat candidate for president, is a self-avowed socialist. He’s officially an Independent, but caucuses with the Democrats and votes with them 98% of the time, according to Socialistworker.org.

The significance increases further when Sander’s burgeoning popularity in the Democrat presidential polls is analyzed. Having started out in single-digit support just two months ago, Sanders has significantly reduced frontrunner Hillary Clinton’s lead. In Sander’s neighboring state of New Hampshire, one of the early voting states, Sanders now leads Clinton by 7%. Considering only 38% of Americans feel Clinton is “trustworthy,” it’s surprising the former Secretary of State has any lead in any polls, anywhere.

Sanders is attracting larger campaign crowds than any of the other presidential candidates. Earlier this week he attracted nearly 28,000 in Los Angeles, 28,000 in Portland, Oregon, and over 15,000 in Seattle.

When looking at his proposals, it’s difficult to identify any substantive differences from mainstream Democrat Party doctrine. Sanders is pushing for universal single-payer health care; supports redistribution of wealth; advocates “free” college; fosters an antipathy toward corporations and “big business;” wants military spending cut by 50%; opposes natural resource development for energy; advocates government control and solutions for all economic or cultural challenges; and emphasizes egalitarianism rather than merit and achievement.

These tenets fit comfortably under the socialist umbrella, which, in general terms, is “An economic and political system based on public or collective ownership of the means of production. Socialism emphasizes equality rather than achievement, and values workers by the amount of time they put in rather than by the amount of value they produce. It also makes individuals dependent on the state for everything from food to health care. While capitalism is based on a price system, profit and loss and private property rights, socialism is based on bureaucratic central planning and collective ownership,” according to Investopedia.

There are some distinctions that should be made, however. The American variety of socialism (liberalism and progressivism) has a democratic component that doesn’t require a revolution, as many of the European and Asian models featured, but rather relies upon a democratic vote to incorporate. This necessitates the means to organize communities and proliferate propaganda, in order to effect electoral change. Saul Alinsky’s “Rules for Radicals,” rose in direct response to that need, as a playbook for societal polarization and proliferation of socialist objectives. And perhaps not coincidentally, Hillary Clinton wrote her senior thesis at Wellesley College on the Alinsky model, and President Obama taught it as a community organizer, and has implemented it to perfection nationally.

Jason Riley, a Manhattan Institute Senior Fellow, wrote in the Wall Street Journal this week, “Mr. Sanders’s socialism appeals mainly to upper-middle-class professionals and fits neatly within the parameters of mainstream, income-inequality-obsessed Democratic politics in the 21st century. He may have an affinity for a political ideology that has given the world everything from the Soviet Gulag to modern-day Greece, but in this age of Obama, the senator is just another liberal with a statist agenda.”

Founded in individual liberty, America has always been the one nation under heaven where equality of opportunity has taken precedence over equality of outcome. The whole concept of the “American Dream” is based on the individual freedom to become, to achieve, to build, sell, and succeed. This requires individual freedom (which is diminished proportionate to expanded governmental power), and a free market economy (not centralized planning, or government control over the means of production). Consequently, socialism is philosophically, morally, and pragmatically, antithetical to American values. Deductively, it is clearly anti-American.

Which brings us back to the chairman of the DNC. With the apparent inability to make any substantive distinction between the major tenets of socialism and the contemporary Democrat Party, it’s perfectly understandable that Wasserman-Shultz would not attempt to note any contradistinction. For as Riley observed in his WSJ piece, “These days, it’s largely a distinction without a difference.”