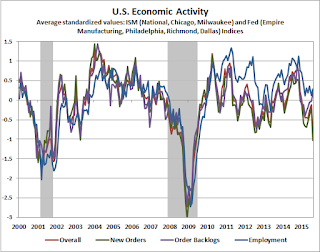 John Hussman has the right to gloat on this Black Monday morning as global stock markets meltdown under the weight of central bank created debt, insane debt financed corporate buybacks, and stock valuations rivaling 1929 and 2000 levels.

He has been scorned, ridiculed and laughed at by the Ivy League educated sociopathic Wall Street titans of greed and avarice. Only in a warped, manipulated, corrupt, rigged financial world would those who speak the truth, use facts, and honestly assess the markets based on historical relationships would a man like John Hussman be abused by the elitist Wall Street lemmings.

He has too much integrity and class to lower himself to the level of Wall Street hucksters. His letter this week is heavy on substance, facts, and sound reasoning. Therefore, it is of no use to CNBC cheerleaders or Wall Street shysters. His lessons are timeless.

Rather, the key lesson to draw from recent market cycles, and those across a century of history, is this:

Valuations are the main driver of long-term returns, but the main driver of market returns over shorter horizons is the attitude of investors toward risk, and the most reliable way to measure this is through the uniformity or divergence of market internals. When market internals are uniformly favorable, overvaluation has little effect, and monetary easing can encourage further risk-seeking speculation. Conversely, when deterioration in market internals signals a shift toward risk-aversion among investors, monetary easing has little effect, and overvaluation can suddenly matter with a vengeance.

He wrote this letter over the weekend before the plunge in Chinese shares and the opening decline of 1,110 points on the Dow. There has been no specific event or tragedy which triggered the start of this global equity collapse. Hussman describes the explosion perfectly. The Fed and other central bankers around the world have loaded the wheelbarrow with dynamite (debt) and rolled into the den of rookie Wall Street fire jugglers. The Chinese dropped the torch (currency devaluation) and the world is blowing up like a Chinese sodium cyanide plant.

Last week’s decline, while seemingly significant, was actually a rather run-of-the-mill example of “unpleasant skew” that has regularly followed similar market conditions throughout history.

We should distinguish between causes and triggers here. If you roll a wheelbarrow of dynamite into a crowd of fire jugglers, there’s not much chance things will end well. The cause of the inevitable wreckage is the dynamite, but the trigger is the guy who drops his torch. Likewise, once extreme valuations are established as a result of yield-seeking speculation that is enabled (1997-2000), encouraged (2004-2007), or actively promoted (2010-2014) by the Federal Reserve, an eventual collapse is inevitable. By starving investors of safe return, activist Fed policy has promoted repeated valuation bubbles, and inevitable collapses, in risky assets. On the basis of valuation measures having the strongest correlation with actual subsequent market returns, we fully expect the S&P 500 to decline by 40-55% over the completion of the current market cycle. The only uncertainty has been the triggers.

The U.S. stock market plunged by over 6% in a matter of seconds this morning. The Plunge Protection Team (NY Fed) lept into the breach using derivatives to reverse the plunge. As of midday they had successfully reversed 1,000 points of the 1,110 point plunge. But, please take note of Dr. Hussman’s last sentence in the paragraph above. No matter what happens today, the stock market will decline by 40% to 55% over the next year or so. The trigger is meaningless. If it wasn’t China, it would have been Greece, Brazil, or oil prices. The markets around the world are vastly overvalued and will fall no matter what central bankers do or say. The ridiculous storyline about a .25% increase in a Fed controlled interest rate is just smoke and mirrors to keep you distracted from the real issue of unpayable debt and epic bubbles in stocks, bonds and real estate.


My impression is that trigger of last week’s market loss was not China’s yuan devaluation or even concern about the potential for a Federal Reserve rate hike. Rather, the trigger was most likely the sudden deterioration of leading economic measures, energy prices, and industrial commodities, both in the U.S. and globally. This weakness first became evident in February (see Market Action Suggests Abrupt Slowing in Global Economic Activity). After a brief rebound, the data has deteriorated abruptly once again. While extraordinary monetary interventions across the globe have certainly distorted the financial markets, they have done little to support the real economy, and developing economic weakness in the U.S. and abroad is beginning to clarify that ineffectiveness.

For those inclined towards a visual representation of our economy going into recession and markets following the economy southward, Hussman provides a couple graphs for your enjoyment. The last two times we’ve seen a plunge in economic activity on par with today we were entering the 2008 and 2001 recessions. And we know how well stock performed during those time periods.

Based on reports available through Friday, the chart below of regional Fed and purchasing manager surveys shows the fresh deterioration we observe here. 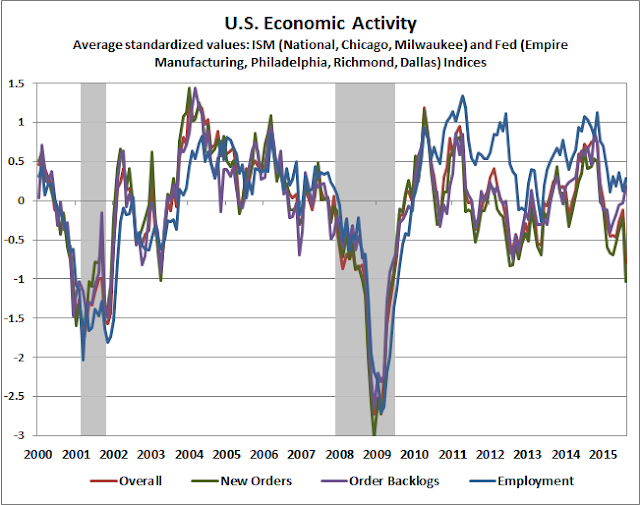 Remember the sequence I described in February, as credit spreads widened and industrial commodity prices fell: “Generally speaking, joint market action like this provides the earliest signal of potential economic strains, followed by the new orders and production components of regional purchasing managers indices and Fed surveys, followed by real sales, followed by real production, followed by real income, followed by new claims for unemployment, and confirmed much later by payroll employment.”

The charts below illustrate this sequence. First, order surpluses lead output. The chart below measures order surplus as new orders plus backlogs, minus inventories, based on standardized values of regional Federal Reserve and purchasing managers surveys, compared with the “headline” indices of these surveys three months later. The recent dropoff in order surpluses is an important economic concern here. 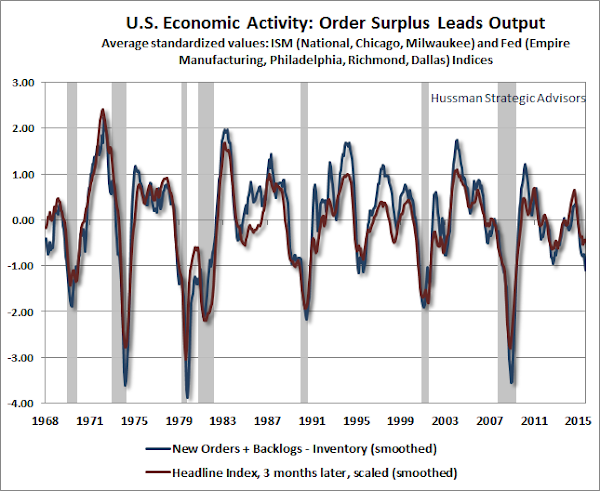 The volatility of the stock market over the last two years has been non-existent. The VIX hit an all-time low last week. It’s the complacency of the arrogant Wall Street trader thirty year olds that makes last week and today a joy to observe. The average Joe hasn’t been in this market since getting wiped out in 2008/2009. The market is completely in the control of big headed MBA Wall Street HFT gurus. Their computer programs are infallible until they all try to do the same thing at the same time. The 1,100 plunge scared the shit out of these algo-pilots. Investors better get used to it. The market may recover all its losses today, but there are volatile days ahead and many losses to go. The geniuses who have bought the dip for the last five years and won, will be losers using that strategy over the next two years.

In my view, one of the reasons that market plunges feel so chaotic and disruptive is that investors don’t anticipate the scale dilation that typically occurs as risk premiums spike higher. In the stock market, this happens with regularity in every cycle. Put simply, the day-to-day market declines that investors have come to believe are significant today are child’s play relative to the range of movement that they should expect as the scale dilates over the completion of the current market cycle.

In 30 years as a professional investor, I’ve watched many of those dilations in real time, including those that followed the 1987, 2000 and 2007 peaks. What happens is this: as the scale dilates, investors seem to mentally cling to their experience of smaller fluctuations, so the large initial declines of a bear market are frightening, but also seem extremely enticing, because the rebounds after those initial declines also tend to be large and encouraging. That’s often why investors are lured into “buying the dip” early in a bear market. Those initial declines can end up looking quite small once the full scope of the market loss unfolds.

Over the completion of this market cycle, investors are likely to observe significant scale dilation – as risk premiums normalize in spikes and volatility increases. The dilation from contained losses to vertical losses is one of the primary causes of investor panic, because the dilated movements feel so out-of-character with recent experience. Factor this sort of behavior into your expectations.

Don’t be fooled into a false sense of security by the bounce back today and any subsequent bounces this week. The uptrend has been broken. Last week was a walk in the park compared to what is on the way. Steep vertical losses dead ahead.

When a previously overvalued, overbought, overbullish market is joined by internal deterioration – with numerous securities, sectors, industries and securities simultaneously breaking down, accepting market risk is typically not rewarded. Market cycles across history teach that range bound markets, particularly at elevated valuations, often offer a false sense of security; making investors believe that their risk is low because day-to-day volatility is contained. Last week’s market loss was initial and quite contained from the standpoint of current valuations. My view is that under the market conditions we presently observe, investors face the continued potential for steep, vertical losses.