HUSSMAN: Get Out Before It’s Too Late 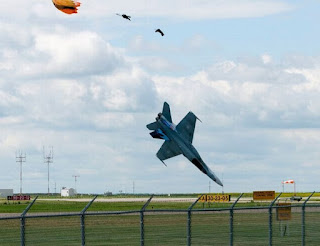 Last week ended with the cackling hens on CNBC and the spokesmodels on Bloomberg bloviating about the temporary pothole on the road to riches. They assured their few thousand remaining viewers the 11% plunge in the stock market was caused by China and the communist government’s direct intervention in their stock market, arrest of a brokerage CEO, and threat to prosecute sellers surely cured what ails their market. The Fed and their Plunge Protection Team co-conspirators reversed the free fall, manipulating derivatives and creating a short seller covering rally back to previous week levels. The moneyed interests are desperate to retain the appearance of normality and stability, as their debt saturated system teeters on the verge of collapse.

John Hussman’s weekly letter provides sound advice for anyone looking to avoid a 50% loss in the next 18 months. The market has been overvalued for the last three years and now sits at overvaluation levels on par with 1929 and 2000. The difference is that fear has been overtaking greed in the psyches of traders. The average Joe isn’t in the market. Only the Ivy League MBA High frequency trading computer gurus are playing in this rigged market. The 1,100 point crash last Monday is what happens when arrogant young traders, fear and computer algorithms combine in a perfect storm of mindless selling. Suddenly the pompous risk takers became frightened risk-averse lemmings.

The single most important thing for investors to understand here is how current market conditions differ from those that existed through the majority of the market advance of recent years. The difference isn’t valuations. On measures that are best correlated with actual subsequent 10-year S&P 500 total returns, the market has advanced from strenuous, to extreme, to obscene overvaluation, largely without consequence. The difference is that investor risk-preferences have shifted from risk-seeking to risk-aversion.

If there is a single lesson to be learned from the period since 2009, it is not a lesson about the irrelevance of valuations, nor about the omnipotence of the Federal Reserve. Rather, it is a lesson about the importance of investor attitudes toward risk, and the effectiveness of measuring those preferences directly through the broad uniformity or divergence of individual stocks, industries, sectors, and security types. In prior market cycles, the emergence of extremely overvalued, overbought, overbullish conditions was typically accompanied or closely followed by deterioration in market internals. In the face of Fed induced yield-seeking speculation, one needed to wait until market internals deteriorated explicitly. When rich valuations are coupled with deterioration in market internals, overvaluation that previously seemed irrelevant has often transformed into sudden and vertical market losses.

With corporate profits falling, margin debt at all-time highs, the Fed preparing to raise rates, China’s fake economic system imploding, currency wars breaking out across the globe, emerging markets in turmoil, oil dependent countries in the Middle East seeing budgets go deeply in the red, Greece and the other insolvent southern European countries nearing collapse and tensions rising between Russia, Europe and the U.S., there is plenty to fear in this central banker created debt bubble world. History teaches us this isn’t over. It’s only just begun. The bubblevision assertions that the worst is behind us is false. They will insist all is well until you’ve lost half your net worth. When fear overtakes greed, neither monetary easing, propaganda, nor acts of desperation by politicians, government bureaucrats, or central bankers will turn the tide.

It may not be obvious that investor risk-preferences have shifted toward risk aversion. It’s certainly not evident in the enthusiastic talk about a 10% correction being “out of the way,” or the confident assertions that a “V-bottom” is behind us. But a century of history demonstrates that market internals speak louder than anything else – even where the Federal Reserve is concerned. Why did stocks lose half their value in 2000-2002 and 2007-2009 despite aggressive and persistent monetary easing? The answer is that monetary easing doesn’t reliably support speculation when investors have turned toward risk aversion, as indicated by the state of market internals.

Why has the market become much more vulnerable to vertical losses since last summer? Because market internals have turned negative, indicating that investors have subtly become more risk averse, removing the primary support that has held back the consequences of obscene overvaluation. If the Fed is going to launch QE4 and QE5 and QE6, or if zero interest rate conditions are going to support speculation as far as the eye can see, those policies will only have their effect on stocks by shifting investors back toward risk-seeking, and the best measure of that shift will be through the observable behavior of market internals.

If the powers that be are this panicked with the market only off 6% from its all-time high, imagine how they’ll react when this turns into a route on par with the plunge in the Chinese markets. The average person on the street was worried early last week, but they mindlessly just regurgitated the mantra preached to them by MSM talking heads and Wall Street investment shills about long-term, blah, blah, blah. They acted the same way in 2007 through 2009, as their retirement funds were obliterated. The fact is that stocks are extremely overvalued and are going to fall, whether the moneyed interests like it or not.

It’s important to recognize that the S&P 500 is down only about 6% from its record high, while the most historically reliable valuation measures are double their historical norms; a level that we still associate with expected 10-year S&P 500 nominal total returns of approximately zero. We fully expect a 40-55% market loss over the completion of the present market cycle. Such a loss would only bring valuations to levels that have been historically run-of-the-mill. Investors need not expect, but should absolutely allow for, a market loss of that magnitude. If your investment portfolio is well-aligned with your actual risk tolerance and the horizon over which you expect to spend the funds, do nothing. Otherwise, use this moment as an opportunity to set it right. Whatever you’re going to do, do it. You may not get another opportunity, and if you’re taking more equity risk than you wish to carry over the completion of this cycle, you still have the opportunity to adjust at stock prices that are close to the highest levels in history.

How many Boomers or Gen Xers are prepared for 0% returns on their 401ks over the next ten years, with a 50% plunge thrown in for good measure? This market pullback is a drop in the proverbial bucket. Everyone should be using this dead cat bounce as an opportunity to get out of the market. But most will not heed Hussman’s advice. Their cognitive dissonance is too overwhelming.

The chart below offers a good idea of how little conditions have changed in response to the recent market pullback. The blue line shows the ratio of nonfinancial market capitalization to corporate gross value added, on an inverted log scale (so that equal movements represent the same percentage change). The slight uptick at the very right hand edge of the chart is barely discernable. That’s the recent market selloff. Current valuations remain consistent with expectations of zero nominal total returns for the S&P 500 over the coming decade. 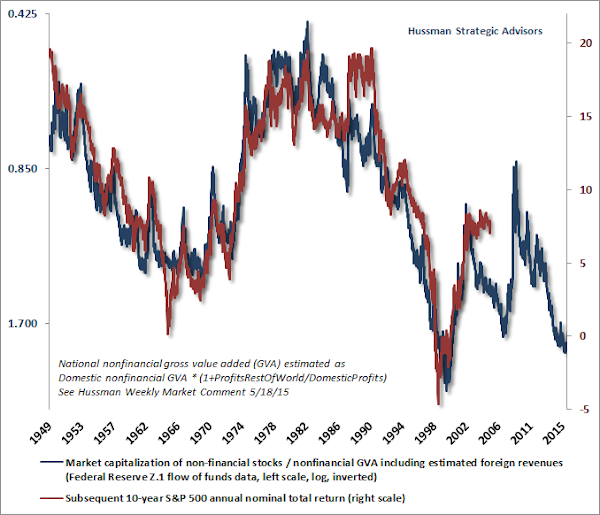 The Fed is now nothing more than a helpless bunch of academic theorist bystanders as they already have interest rates at zero and have poured $3 trillion down the drain in their fruitless Keynesian effort to revive this zombie economy. Low interest rates didn’t work and they will not avert the coming stock market collapse.

Yes, low interest rates may encourage investors to drive stocks to extremely high valuations that are associated with low prospective equity returns. We certainly believe that as long as investor preferences are risk-seeking (as we infer from market internals), monetary easing and QE can encourage yield-seeking speculation that drives equities to recklessly extreme valuations. The point is that once valuations are driven to those obscene levels, low interest rates do nothing to prevent actual subsequent market returns from being dismal in the longer term. The low subsequent returns are baked in the cake.

Now for the money quote. Market crashes happen in stages. After an initial plunge, a recovery bounce occurs but fails to reach the pre-plunge levels. And then the bottom falls out.

As I noted early this year (see A Better Lesson than “This Time Is Different”), market crashes “have tended to unfold after the market has already lost 10-14% and the recovery from that low fails.” Prior pre-crash bounces have generally been in the 6-7% range, which is what we observed last week, so I certainly don’t see that bounce as having removed any of our concerns. We remain extremely alert to the prospect for much more extended market losses.

Despite the brave talk from the buy and hold crowd, no one is prepared for a 50% loss over an 18 month horizon. These are the people who will hold until the market has already fallen by 30% and then panic. It has paid to be reckless and foolish over the last three years. It’s this same reckless attitude that brought down the dot.com day traders in 2001, house flippers in 2006, and subprime derivative gurus in 2008. Rational, risk averse, clear minded people need to bail out of the stock market now. It may be your last chance.

Again, if your portfolio is well aligned with your risk-tolerance and investment horizon, given a realistic understanding of the extent of the market losses that have emerged over past market cycles, and may emerge over the completion of this cycle, then it’s fine to do nothing. Otherwise, use this opportunity to set things right. If you’re taking more equity risk than you can actually tolerate if the market goes south, setting your portfolio right isn’t a market call – it’s just sound financial planning. It’s only fun to be reckless if you also turn out to be lucky. Market conditions are now more hostile than at any time since the 2007 peak. If you want to be speculating, and you can tolerate the outcome, then you’re not taking too much equity risk in the first place. But it’s one or the other. Can you tolerate a 40-55% market loss over the next 18 months or so? If not, take this opportunity to set things right. That’s not the worst-case scenario under present conditions; it’s actually the run-of-the-mill historical expectation.