LEGACY: Obama will leave Democrats in their worst shape since the Great Depression—even if Hillary wins

Even as Democrats look favorably ahead to the presidential landscape of 2016, the strength in the Electoral College belies huge losses across much of the country. In fact, no president in modern times has presided over so disastrous a stretch for his party, at almost every level of politics... 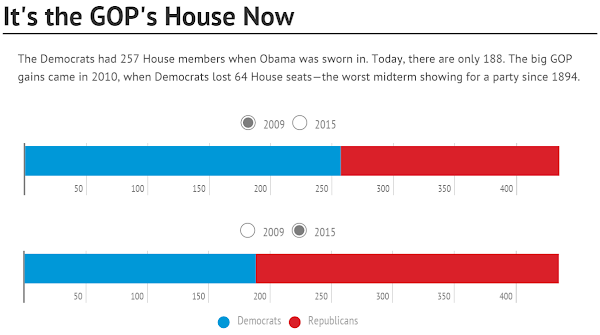 ...The party’s record over the past six years has made clear that when Barack Obama leaves office in January 2017 the Democratic Party will have ceded vast sections of the country to Republicans, and will be left with a weak bench of high-level elected officials. It is, in fact, so bleak a record that even if the Democrats hold the White House and retake the Senate in 2016, the party’s wounds will remain deep and enduring, threatening the enactment of anything like a “progressive” agenda across much of the nation and eliminating nearly a decade’s worth of rising stars who might help strengthen the party in elections ahead...

...Barack Obama took office in 2009 with 60 Democrats in the Senate—counting two independents who caucused with the party—and 257 House members. Today, there are 46 members of the Senate Democratic caucus, the worst showing since the first year after the Reagan landslide. Across the Capitol, there are 188 Democrats in the House, giving Republicans their best showing since Herbert Hoover took the White House in 1929...

...This is, however, the tip of the iceberg. When you look at the states, the collapse of the party’s fortunes are worse. Republicans now hold 31 governorships, nine more than they held when Obama was inaugurated. During the last six years the GOP has won governorships in purple and even deep blue states: Maine, Massachusetts, New Jersey, Maryland, Wisconsin, Michigan, Illinois, New Mexico, Nevada, Ohio...

...Taken as a whole, these six years have been almost historically awful for Democrats. You have to go back to the Great Depression and the Watergate years to find so dramatic a reversal of fortunes for a party. And this time, there’s neither a Great Depression nor a criminal conspiracy in the White House to explain what has happened.

No, just a bunch of traitorous goose-steppers who have put party above country time after time, most recently in the case of the insane Iran nuclear deal.

Greenfield notes a scathing indictment by none other than Democrat Party Vice Chair Donna Brazile: "It’s almost a crime,” she said, “We have been absolutely decimated at the state and local level."

It couldn't happen to a nicer bunch of goose-steppers.