Rejected GOP leader Eric Cantor will endorse Jeb Bush and become the co-chair of Bush’s presidential campaign in Virginia, according to Politico. 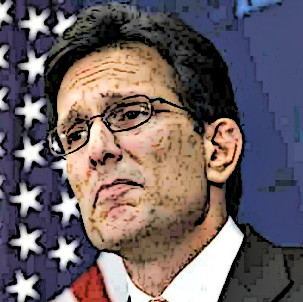 Cantor was rejected by his Virginia constituents in 2014 for backing a plan developed by Democrats, Republicans, and business leaders that would triple the nation’s huge inflow of migrants.

Bush is promoting a similar migration-boosting policy in his 2016 campaign.

Bush has picked Cantor—who is now working as an investment banker in New York—because of his ability to raise huge funds from business investors, Politico said. Cantor “retains a strong political network in Virginia and has enviable connections among Jewish business leaders who can be key supporters and donors,” says the Politico report.

In turn, Cantor’s support for Bush shows that “he’s making a play for a cabinet position in the next Republican presidential administration,” a source active in the Republican Party of Virginia told Breitbart News.

Last month, Cantor slammed Donald Trump’s popular migration-reform plan, which draws much support from many of Cantor’s former constituents. Trump’s policy is “mean, it’s ugly, it’s divisive, and it is not a sustainable model… ultimately that kind of language, which is off-putting to a large swath of the population, is not something that will elect a president,” Cantor claimed in July.

Cantor held his position as House Majority Leader until he was rejected by his GOP supporters in the June 2014 primary. In the 7th district ballot, Cantor was trounced by a little-known economics professor, Dave Brat, who slammed Cantor’s cooperation with corporatist groups:

There is no member of Congress more beholden to global corporate interests than Eric Cantor. He has spoken for hours and hours about immigration yet never once spoken one word – one word – about protecting unemployed American citizens… about protecting the jobs of college students, single mothers, and working families. He doesn’t work for you. He works for larger corporations seeking a never-ending supply of low-wage foreign workers. He even praised the Chamber of Commerce guest worker proposal that drives down American wages and imports millions of guest workers to take their jobs.

Cantor’s constituents were outraged by his concealed support for Florida Sen. Marco Rubio (R-FL)’s Senate immigration bill. “Cantor drafted the House Leadership amnesty plan, which according to the Wall Street Journal, contains the same core elements as the Obama-Reid [Senate Gang of Eight] immigration plan… [and] includes amnesty for all illegals and it includes a massive boost in cheap foreign labor for corporations,” Brat said during the primary campaign.

After his defeat, Cantor was quickly hired by a Wall Street investment firm, Moelis & Co., to help shape federal tax and regulatory policy.

He’s kept his political friendships and his fundraising network.

Over the last few months, “Cantor was courted intensely by other [presidential] candidates,” says Politico.

Until now, Cantor held off from supporting any of the GOP’s 2016 candidates.

He held a fundraiser for Governor Chris Christie and voiced support for Rubio as “a very dynamic public figure for us.”

Rubio “is young, he’s obviously very articulate and somebody, who with a Hispanic background, does add a tremendous amount to what it means to be a Republican for us to begin to reach out to a more diverse electorate,” Cantor said, referring to the growing number of Democratic-leaning voters created by business’ demand for cheap foreign labor.

But Cantor’s decision to back Bush suggests that he thinks Christie and Rubio will lose the 2016 race and will not be the candidates to propel him to a cabinet position in the next presidential administration.

agraves said...
This comment has been removed by a blog administrator.
4:31 PM

Marlee Matlin is less tonedeaf than the Republican Establishment though that's not really fair.

They can hear you - they just don't give a flying ratphuk what you think or have to say.

is boehner or mcconnell jewish? how about obama or harry reid or nancy pelosi or the other oligarchs destroying this country?

Remember how the actor Ted McGinley was called 'sitcom killer' since every show he joined as a cast member was cancelled soon after?Cantor is the political Ted McGinley.