Last year, according to reports on file with the U.S. Department of Labor, the Service Employees Internationals Union paid Scott Courtney $232,060 in total compensation. 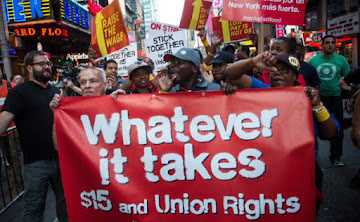 However, that is a mere pittance to the estimated nearly $80 million that the SEIU has shelled out in its nearly three-year battle to unionize the nation’s fast-food workers.

Though his official SEIU title is “Deputy Chief of Staff,” according to a post in the Guardian, Courtney is the chief strategist of the SEIU’s Fight for $15 campaign–the campaign concocted by the SEIU in late 2009 as a means of unionizing low-wage fast-food workers.

To date, Courtney and the SEIU have rejected the notion of unionizing 100 or 200 McDonalds and negotiating higher wages to use as a model elsewhere, opting instead for a much grander goal.

Courtney envisions a giant, nationwide organization of low-wage workers that would be financially sustainable and would continuously pressure companies and lawmakers on wages and working conditions.

“This doesn’t necessary have to be like the union my grandfather helped build at his factory in the 1930s,” he said.

To that end, Courney says the SEIU “would continue spending whatever it takes to sustain the movement.”

Thus far, SEIU has spent upwards of $80 million during the course of its war on the fast-food industry.

Heidi Barker Sa Shekhem, a McDonald’s spokeswoman, said the SEIU has spent over $80m in members’ dues money “attacking the McDonald’s brand and the independent franchisees who own 90% of McDonald’s restaurants, in an unsuccessful attempt to unionize workers”.

However, the payoff for the SEIU is potentially billions of dollars in possible dues revenue.

To the SEIU, the union primarily responsible for ObamaCare and the union movement’s current fight for “immigration reform,” spending millions of its members dues in order to achieve its desired goals is par for the course.

Even under former union leaders John Sweeney–who went on to become the president of the AFL-CIO in 1996–as well as informal Obama advisor, SEIU president Andy Stern (who “retired” from the SEIU amid scandal), the ends have always justified the means.

Pretty shitty deal to franchise several McDonalds and have these assholes gunning for you-I would be looking at kiosks.
MM

Seriously, I also think that the SEIU bean counters must have worked the math out regarding the incremental amount of money they could recover in dues from the "extra" money their members would get from the raised wage)