[The state's health care commissioner approved a] 36.3% increase sought by the biggest health plan in the state, BlueCross BlueShield of Tennessee. She said the insurer demonstrated the hefty increase for 2016 was needed to cover higher-than-expected claims from sick people who signed up for individual policies in the first two years of the Affordable Care Act. 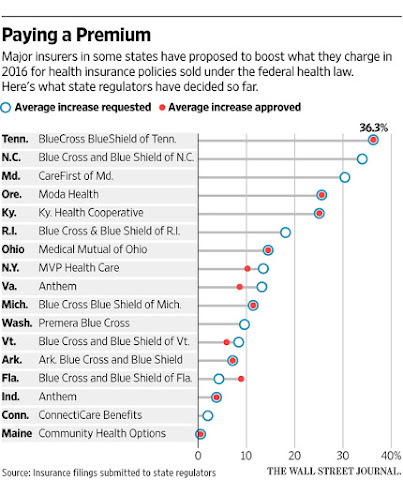 Several regulators around the country agree with her, and have approved all or most of the big premium increases sought by the largest health plans in their states for the new sign-up season that begins Nov. 1.

...the upsurge is likely to be a big talking point not only during the three-month enrollment season, but through the 2016 campaigns, where GOP opponents of the law are expected to use it as a defining issue against their Democratic rivals.

It’s the third year in a row for huge rate hikes, all due to the uncertainties built into the mandate-driven system of ObamaCare. The White House explained the hikes after the first year as an artifact of sudden access to care, but by year three that explanation has worn thin. The cost curve isn’t bending downward in any phase of health care, and it’s not even bending upward any longer. It’s skyrocketing, and insurers are reflecting that in their premium hikes.

At the same time that premiums have escalated, of course, deductibles have expanded almost exponentially for some families. Consumers are paying outrageously high premiums for insurance they will almost certainly never access, thanks to the need to spend thousands more out of pocket on top of these premiums before insurers have to cover anything...

One final option for insurers: to abandon the individual market and write only group (employer-based) policies, which was the whole point of Obamacare. Which was the point all along, on the road to single-payer.