It was not meant for public disclosure but a news outlet got ahold of a chilling Federal Bureau of Investigation (FBI) alert warning U.S. military families that they are being watched and confronted by Middle Eastern men. 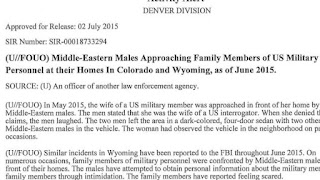 The cryptic FBI memo was issued to law enforcement agencies in Colorado and Wyoming and says that Middle Eastern men are approaching families of U.S. military members at their homes in both states, specifically in Greeley and Cheyenne, Wyoming. The Middle Eastern men have also tried to gain personal information about military members and their families through intimidation, according to the FBI bulletin, which reveals that the victims reported feeling scared.

Among the stalking victims is the wife of a military member who was approached by two Middle Eastern men in front of her house. The FBI statement says the Middle Easterners told the woman that she's the wife of a U.S. interrogator and the men laughed when she denied their claims. Then they fled in a dark, four-door sedan with two other Middle Eastern males inside. "The woman had observed the vehicle in the neighborhood on previous occasions," the FBI alert confirms. This was not an isolated incident and in fact, the FBI reveals that it has received similar reports of similar events occurring in Wyoming throughout June.

The feds are probably scratching their collective heads wondering who leaked this internal memo. When the news outfit that made it public contacted the FBI, the agency refused to comment but the Colorado Department of Homeland Security acknowledged the alert had been issued and encouraged military families to report suspicious behavior to the FBI. Judicial Watch also put in a call to the FBI and its umbrella agencies-the departments of Justice (DOJ) and Homeland Security (DHS), but all three failed to respond as has been the case when JW has reported on related issues.

Last fall JW broke a story about the threat posed to a U.S. military base by Islamic terrorists operating in the Mexican border city of Ciudad Juarez. High-level federal law enforcement, intelligence and other sources confirmed to JW that a warning bulletin for an imminent terrorist attack on the border had been issued. The plot involved using car bombs or other vehicle borne improvised explosive devices (VBIED) to attack the U.S., apparently including Ft. Bliss, the Army base in El Paso, Texas. DHS did not respond to multiple inquiries from JW about the information but the commanding general at Ft. Bliss was briefed and the compound implemented increased security measures.

A few weeks later senior military experts contacted by JW confirmed that, based on the sudden increase in security, Ft. Bliss was likely a target of the terrorist attack even though the Obama administration went out of its way to deny it. Military installations in the U.S. only make changes to security measures when there are clear and present threats, the experts told JW. One of them, retired Army Lt. Gen. Jerry Boykin, former commander of the Army's elite Delta Force who also served four years as Deputy Undersecretary of Defense for Intelligence, confirmed that "Ft. Bliss had to have a clear and present threat."

The Ft. Hood Army base in Texas is also a target for Islamic terrorists, according to retired U.S. Army Maj. Gen. Paul E. Vallely, who's regularly briefed by high-level contacts in the region. As we all know, Ft. Hood was already attacked by a radical Army psychiatrist (Nidal Malik Hasan) who murdered 13 colleagues and wounded dozens of others as he chanted "Allahu Akbar!" (God is great in Arabic). Hasan had ties to a radical mosque leader (Anwar al Awlaki) who promotes jihad against the U.S., attempted to contact Al Qaeda associates prior to the attack and defended Islamic suicide bombers in comments he posted on the internet.

Now this new leaked FBI alert confirms what has been reported-and officially denied by the government-for months; that Middle Eastern men, likely with terrorist intentions, are targeting U.S. military personnel on their own soil.

You can support the all-important mission of Judicial Watch by clicking here.

These women seem to be displaying good situational awareness and are good witnesses after the fact. Mooslim men do not know American women very well, they are mama bears, - predators when it comes to their families. Omar and Rashid will end up wrapped in pigskin if they keep it up. Our Military wives aren't push overs and their men need not worry.
Only cowards, and the profane adorn a religious culture that intimidates women.

Be sure to give them a warm welcome.