"A STIMULUS PACKAGE FOR JIHAD": Obama’s Deal with Iran 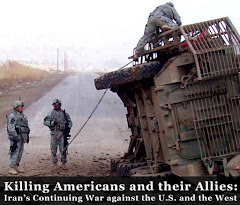 The Obama administration’s nuclear agreement is nothing more than a stimulus package for jihad. Billions of dollars will flow into the world’s worst terror-exporting country — a sworn enemy of the United States — and it will soon enough even have (legal) access to international conventional-arms markets. It can continue to export terror and even kill American soldiers without breaching the nuclear agreement.

According to military experts, Iran has already slaughtered more than 1,000 U.S. soldiers since 9/11.

Iranian military action ... has led to the deaths of well over a thousand American soldiers in Iraq and Afghanistan over the last decade and a half. Throughout the course of the Iraq campaign, a variety of weapons flowed into the country through direct purchases by the government of Iran ... [in fact,] three Iranian factories were “mass producing” the roadside EFP bombs used to kill soldiers in Iraq ... Iran paid Taliban fighters $1,000 for each U.S. soldier they killed in Afghanistan.

As French separately observes, Iran has been waging a low-intensity war against the United States since 1979. It directed terror attacks in Lebanon and Saudi Arabia that killed hundreds of Americans, continues to fund the Taliban, and has engaged in hostile activities against U.S. warships in the Persian Gulf.

In short, the "world’s most prolific terror-exporting nation keeps its nuclear program, maintains its support for anti-American jihadists, receives the mother of all economic-stimulus packages, and gains access to the international arms market."

While Obama terms this deal a victory, history -- French notes -- is certain to call it a catastrophe.