FITTING: Court Halts EPA Takeover of America’s Ponds, Streams and Puddles After it Destroys an Entire River With Toxic Sludge

The same EPA that just destroyed a river in Colorado (with damages estimated as high as $30 billion) had the brakes applied today to its attempted takeover of all waterways within the United States. A federal judge blocked an EPA rule that sought to seize control of ditches, trenches, puddles, and other non-navigable waters in an unconstitutional power grab orchestrated by the hard left Obama administration. 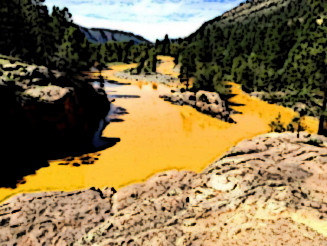 U.S. District Court of North Dakota Chief Judge Ralph Erickson placed a temporary injunction against the agency, which would delay the regulation from taking effect Friday.

"The risk of irreparable harm to the states is both imminent and likely," Erickson said in his decision favoring the 13 states that sued the EPA over its Clean Water Rule, formerly the Waters of the U.S. rule. The rule has become a favorite target of Republicans as an example of federal overreach.

The judge said the water rule requires more study, including "jurisdictional studies" of natural gas, oil and water pipeline projects in North Dakota. The state is a leading U.S. producer of oil derived from shale rock formations deep underground... North Dakota [had] led the charge against EPA in the court, arguing that the rule violated state sovereignty.

Get your popcorn ready and set your DVR to record C-SPAN on September 9th and 17th. That's when the applicable House committees will begin grilling EPA officials as to the cause of their catastrophic spill (hint: they purposely ignored safety measures).

Isn't it ironic that the very same would-be dictators -- who can't even operate the massive federal leviathan they already control -- are never satisfied with the amount of power they possess? Whoever said "absolute power corrupts absolutely" was talking about every single hack in the Obama administration, including the Hack-In-Chief.