The Last Days of Hillary

Hillary Clinton has spent a third of her adult life trying to become president. All for nothing. 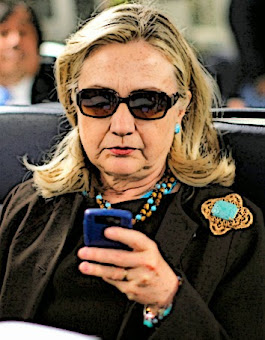 The first time around, she wasted $200 million just to lose to Obama. $11 million of that money came from the notoriously "flat broke" couple. This time around she was determined to take no chances.

Together with her husband she built up a massive war chest using money from foreign governments and speaking fees from non-profits, funneled into her own dirty non-profit and a complex network of unofficial organizations staffed by Clinton loyalists, secured an unofficial endorsement from Obama and carefully avoided answering questions or taking positions on anything. There was no way she could lose.

Now she’s losing all over again.

Hillary has a ton of money, but can’t buy the nomination. She’s spending a quarter of a million a day on a campaign operation with no actual organized opposition to speak of. Even before Biden officially enters the race, she’s falling behind the joke candidacy of Bernie Sanders in key states.

Hillary Clinton’s campaign has spent tens of millions of dollars without making an impact. She spent almost a million on polling only to see her poll numbers drop every week. She dropped $2 million on ads about her mother to try to make women like her. It didn’t work. Nothing is working anymore.

Obama gave Biden his blessing to run. White House spokesman Josh Earnest praised Joe Biden to reporters, saying that there is “no one in American politics today who has a better understanding of exactly what is required to mount a successful national presidential campaign.”

It wasn’t a subtle message.

Earnest suggested that Obama might endorse a Democratic primary candidate. Despite the deal that the Clintons made in which Bill would campaign for Obama in 2012 in exchange for a Hillary endorsement, it’s looking less and less likely like that he will back Hillary Clinton. Instead Biden appears to be his man.

Biden is already polling better than Hillary in a national election. With Obama’s backing, he can strip away Hillary’s minority vote while Bernie Sanders takes the leftist vote. Hillary Clinton is already doubling down on gender politics by accusing pro-life Republicans of being terrorists, but it won’t work.

It didn’t work last time. It won’t work this time. Once again, Hillary has lost.

The only lesson that Hillary Clinton drew from her last election was to double down on all the things she did wrong. Her organization was big last time so she made it even bigger. It got so big that the different Super PACs were fighting each other over fundraising for her campaign. She had lots of money last time, so she was determined to have even more money this time. But that money has been wasted paying an army of useless people who couldn’t even do something as basic as produce a good logo.

Hillary Clinton was paranoid, controlling and dishonest last time. She decided to be twice as paranoid and dishonest this time around and it destroyed her image and her campaign.

Even before the rope lines and the interview boycotts, the media hated her. Once she began to aggressively shut out the media, its personalities gleefully reported on every email server scandal detail that her enemies in the White House fed to the New York Times and other administration mouthpieces.

It wasn’t a vast right wing conspiracy or even a more real left wing conspiracy that destroyed Hillary Clinton. If she were a stronger candidate, Obama and the left would have fallen in line behind her.

Once again, Hillary Clinton destroyed her own candidacy. The latest Quinnipiac poll shows that the top three words people associate with her are “liar,” “dishonest” and “untrustworthy.” If she hadn’t planned a cover-up before there was even anything to cover up and then responded to its disclosure with a series of terrible press conferences climaxing in asking reporters if they meant that she had wiped her email server with a cloth, her old reputation might have stayed buried long enough to win an election.

Now Hillary is right back where she was last time around. She has lots of money, but no one likes her. She’s trying to build a cult of personality, but none of the myriads of people who work for her will tell her the truth about her personality. She inspires no one and there’s no actual reason to vote for her.

With her popularity rapidly vanishing, Hillary is moving to her Führerbunker. Her aides plan to absorb defeats in early states and concentrate all the money and organization on crushing the opposition on Super Tuesday. They’re conceding that Hillary isn’t going to out-campaign her rivals individually, but are betting that her war machine is big enough to destroy them in eleven states at the same time.

Hillary still hasn’t learned that she can’t just buy an election. And she may not have the money to buy it. Donors lost a lot of money funding her failed campaign last time. They came on board again because they were convinced that she had a smooth ride to the nomination. Once Biden enters the race, donors will wait rather than pour more money into the struggling campaign of an unpopular candidate.

And many of the Obama donors who haven’t committed to Hillary will open their wallets for Biden.

ClintonWorld is an expensive theme park to run. All those staffers the Clintons have picked up have to be paid. And the Clintons can’t stop paying them because they have no true loyalists, only mercenaries. If their checks don’t clear, they’ll be working for Biden or O’Malley before you can say "Whitewater."

It will take that machine some time to slow to a halt. Hillary Clinton burned through $200 million fighting Obama. Elections have only gotten more expensive since then. But her donors will learn the hard way that money alone can’t make an unlikable politician with no charisma or compelling message, president.

Hillary Clinton doesn’t have a message, she has ambition. Her obsession with becoming president has overshadowed any reason that anyone might have to vote for her. She offers no hope and less change. Her candidacy is historic… but only for her. There is no promise she can make that anyone will believe.

After having spent much of her life trying to become president, she will leave once again a failure.

Some are hoping that Hillary will go to jail. But the anger, frustration and bitterness that will gnaw on her after wasting decades and a small fortune on two failed efforts to win the White House in which she had every advantage only to lose before even leaving the starting gate will be worse than any prison.

In January 2017, Hillary Clinton will be sitting in front of a television set watching someone else take the oath of office. Nothing the penal system has to offer would be a harsher punishment than that moment.

But it would still be cool to see her arrested. Preferably at her prime time speech during the Democrat National Convention.

Killary should drop out of the presidential race and use her "vast fortune" on defense attorneys. Although, when you are Killary - irritating inconveniences like being found guilty of breaking the law . . . are only a payoff away from getting on with her so-called life.

Not paying attention, Hillary seems to have overlooked how Barack's early election campaigns obliterated his opposition before election day. As president, Barack has legions of loyal sycophant "progressives" ready, willing, and able to destroy Hillary before she gets out of the gate. Hillary's personal corruption, as opposed to institutional corruption, is unpalatable to them. Everyone knows the Clintons are in it to build personal wealth and power, instead of establishing "progressive" hegemony in government.