STATE OF THE ART SECURITY: Hillary’s Email Server Kept in the Bathroom Closet of an Apartment

It turns out that the top diplomatic secrets of the Obama administration and the Hillary State Department were maintained on a home-brew server stashed in the bathroom of an apartment complex. Which seems perfectly consistent with the quality of governance: 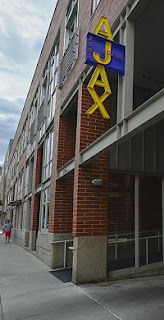 This is the apartment complex where Platte River Networks was based until this year. It used a residential apartment as its base.
The IT company Hillary Clinton chose to maintain her private email account was run from a loft apartment and its servers were housed in the bathroom closet... ex-employees of Platte River Networks in Denver, Colorado ... revealed the outfit's strong links to the Democratic Party but expressed shock that the 2016 presidential candidate chose the small private company for such a sensitive job.

One, Tera Dadiotis, called it 'a mom and pop shop' which was an excellent place to work, but hardly seemed likely to be used to secure state secrets. And Tom Welch, who helped found the company, confirmed the servers were in a bathroom closet.

It can also be disclosed that the small number of employees who were aware of the Clinton contract were told to keep it secret.

The way in which Clinton came to contract a company described as a 'mom and pop' operation remains unclear, [though there is likely] a series of connections between the firm and the Democratic Party...

...Platte River Networks worked for Colorado Governor John Hickenlooper - once heavily tipped to be Clinton's 2016 running mate - during his election to be mayor of the city in 2003... The company's controversial vice president of sales David DeCamillis is also said to be a 'big Democrat' supporter who offered his house to Joe Biden for the party's convention held in Denver in 2008.

It will be the small scale of the firm and its own home-made arrangements which will raise the most significant questions over security and over what checks Clinton's aides made about how suitable it was for dealing with what new transpires to be classified material.

Given the level of IT professionalism, little wonder the FBI believes it may be able to recover the data on Hillary's "wiped" server.

The FBI may be able to recover at least some data from Hillary Clinton's private email server even though there was an attempt to wipe it, two sources with direct knowledge of the process told NBC News on Tuesday.

The FBI is investigating the security of Clinton's personal server and the thumb drives that contain emails related to her work as secretary of state during President Barack Obama's first term. The Clinton campaign has previously acknowledged that there was an attempt to wipe the server before it was turned over last week to the FBI...

Chris Farrell, Judicial Watch’s director of investigations, said the Clinton team’s move to set up her own server is “unprecedented and extraordinary.”

Hillary Clinton's continued assertions that this is all political is patently false. Any mid-level government official who had set up their own server to conduct official business would have been tossed into the can long ago:

“No cabinet secretary has ever established their own external communication system in an effort to circumvent both the unclassified and classified government systems,” said Mr. Farrell, who previously worked as a special agent with U.S. Army counterintelligence. “It’s not an administrative matter to be talked away, it’s a national-security crime.”

Earlier today, Hillary angrily cut off a press conference when forced to ask difficult questions regarding her mishandling of official communications.

"The issue at hand is not whether I broke a few rules or took some liberties with national security secrets," she said -- winking at the press -- "We did. It's whether you can indict an entire political campaign over the actions of a few sick, twisted individuals."